The Amtrak AEM-7 is an electric locomotive built by General Motors Electro-Motive Division for the Northeast Corridor between Washington, DC and Boston.

When Amtrak inherited the passenger operations from the bankrupt Penn Central in 1971 the electrified passenger operations between Washington and New York were in the hands of the aging GG1s. The GG1s were originally built between 1934 and 1943 for the Pennsylvania Railroad. One of the first motive power units to be replaced by Amtrak were the GG1s.

The first attempt at replacing the GG1s was not a great success. Introduced in 1974, the General Electric E60 was unable to safely exceed 100 miles an hour severely limiting their usefulness on what was supposed to be a high-speed main line. The E60s were soon relegated to hauling the slower long-distance services. Amtrak looked to Europe to solve its high-speed operations problem. In 1976-77, one of the locomotives Amtrak tried was the Swedish Rc4. The Rc4 became the basis for the AEM-7.

Amtrak ordered 30 AEM-7s in 1977. The bodies came from the Budd Company with the electrical, trucks and mechanical parts imported from Sweden. Final assembly was the responsibility of what had now become known as Electro Motive Diesel. The first unit went into service in 1979. Amtrak placed further orders for another 17 AEM-7s in 1980 and 7 more in 1987.

After 30-plus years in service the Amtrak AEM-7 fleet is beginning to be replaced. In 2010 Amtrak ordered 70 Siemens ACS-64 locomotives to replace its AEM-7s as well as the newer but unreliable Alstom HHP-8s.

The unit seen here leaving Union Station in Washington DC was one of the original batch of locomotives introduced into service in 1980. This work-horse of Northeast Corridors is showing its age and is need of at least a clean if not a full repaint. The latter, though, will not happen as the engine will be withdrawn from operations when its replacement ACS-64 becomes available.

The condition of the engine made this image an obvious candidate for finishing with a gritty look usually associated with urbex shots. The bright early morning sun providing the warm light on the station areas surrounding the locomotive created a great contrast. A combination of HDR and urbex from On1 Photo’s Effects 10 were used to create the finished image. 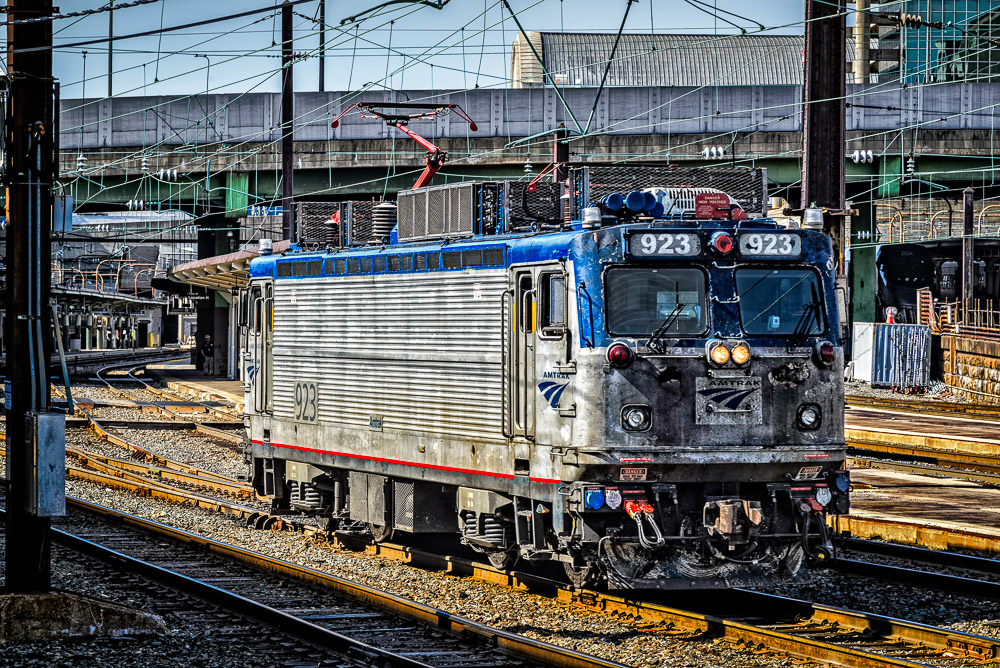