Today we step back inside the roundhouse at the B&O Railroad Museum in Baltimore.  Thatcher Perkins is the name of this beautiful 1863 vintage Baltimore & Ohio Railroad steam locomotive. The railroad first starting using the 4-6-0 configuration about a decade before this engine was built. These units were designed to tackle the tough mountain grades in what is now West Virginia. When No 147 was built, the need was to move Union Troops during the Civil War as well as the general increase in passenger traffic that the B&O was experiencing. No 147 was the first of a series of “ten-wheelers” designed by the B&O’s Master of Machinery, Thatcher Perkins.

After the Civil War, No 147 was used for both passenger and freight operations. It was removed from service in 1892 and preserved for public relations and exhibition purposes. It acquired the name Thatcher Perkins for the B&O’s Fair of the Iron Horse centennial celebrations in 1927. By this time, it had also acquired a new number, 117.  The engine can be seen in this film of the centennial celebrations at about the 5:50 minute mark.

In 2003, the roundhouse roof of the B&O Museum was severely damaged in the major snow storm which deposited almost 27 inches of snow on Baltimore. The engine was also badly damaged as a result of the collapse of the roof. It was fully restored and returned to its original number of 147 in 2010.

Thatcher Perkins is located by the door to the yard where we visited the EMD F7 in the last post.  The only way to capture this engine was as a three-shot HDR set. The final image has been created using the plug-in from On-One Software 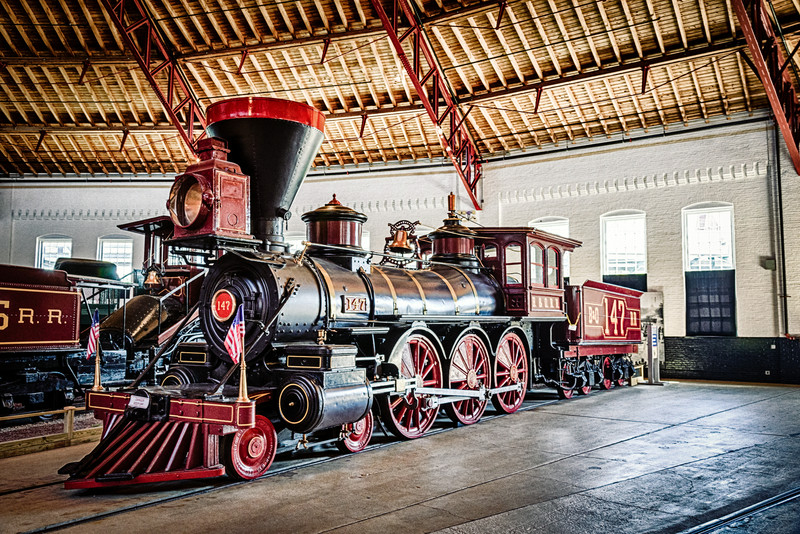