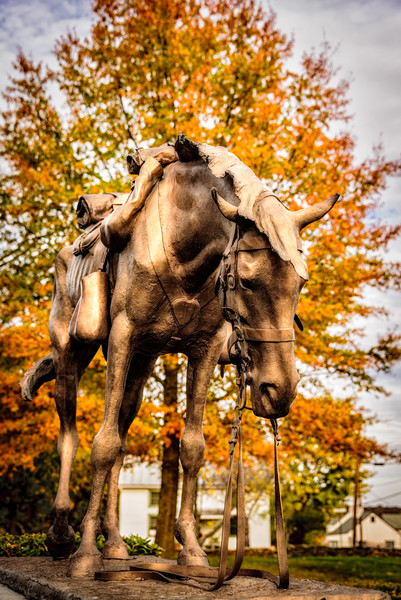 The Civil War Cavalry Horse is a bronze statue at the National Sporting Library & Museum in Middleburg, Virginia. It was sculpted by Tessa Pullan, an English artist specializing in animal sculptures, as a commission from the philanthropist and horse breeder Paul Mellon in 1997.

The story begins three years earlier when in 1994, Mellon received The Cavalry Battles of Aldie, Middleburg and Upperville, June 10-27, 1863 by Robert F. O’Neill Jr., for his 87th birthday. The story of the battles and sacrifices in the area in which he lived had a profound effect on Mellon. There are thousands of memorials honoring the soldiers of the Civil War but there was nothing to pay tribute to the efforts and losses of the horses. Mellon decided to rectify this.

The National Sporting Library provided copies of photographs of saddles, bridles and other cavalry equipment. They also provided photocopies of pictures of horses from their collection including “The American Tommy Atkins in a Montana Blizzard” by Frederick Remington.

Mellon turned all of this over to Tessa Pullan. Mellon was aware of Pullan’s work. She had created a bust of Paul Mellon in 1984, which can be seen at the National Portrait Gallery in London. In 1993, Mellon had also commissioned a three-quarters life size bronze statue of Sea Hero, his 1993 Kentucky Derby winner.

Mellon and his assistant, Beverly Carter met with Steve Taylor, a civil war reenactor. Taylor had his horse saddled to provide a suitable reference model for the statue. The hardest part according to Taylor was to outfit the horse so that it could have been either Union or Confederate. The difference is that Northern and Southern soldiers used Federal gear, but generally Northern soldiers used all Northern gear. All the gear used for the photo-shoot was original to the civil war period.

Pullan based the Civil War Cavalry Horse statue on the Remington painting. The initial model of the intended work had all of the appropriate equipment thanks to the over 200 photographs from the session with Steve Taylor. The problem, though, was that, according to Mellon, the animal looked too well fed. Pullan contacted the RSPCA who provided her with photographs of animal cruelty. She incorporated these horrendous images into the sculpture. The result was a horse whose rider had died with the animal now dying of exhaustion after a long battle.

Civil War historian Nick Nichols was consulted for the inscription on the base of the statue. Nichols primary area of research of the past 30 years has been the cavalry of the Civil War. In his estimate equine mortality, not included wounded, fall in the range of 1,350,000 to 1,500,000. What can only be considered an astounding number. The only way to finish this story is to by simply quote the inscription:

IN MEMORY OF
THE ONE AND ONE HALF MILLION HORSES AND MULES
OF THE CONFEDERATE AND UNION ARMIES WHO WERE KILLED
WERE WOUNDED OR DIED FROM DISEASE IN THE CIVIL WAR
MANY PERISHED WITHIN TWENTY MILES OF MIDDLEBURG
IN THE BATTLES OF ALDIE, MIDDLEBURG AND UPPERVILLE
IN JUNE OF 1863

As amazing as this statue is I cannot just post a photograph of the statue.  I feel it is important to produce something different than a simple copy of the original piece of art.  The images today have been finished with Perfect Effects from OnOne Software which makes creating such stylized looks very easy. 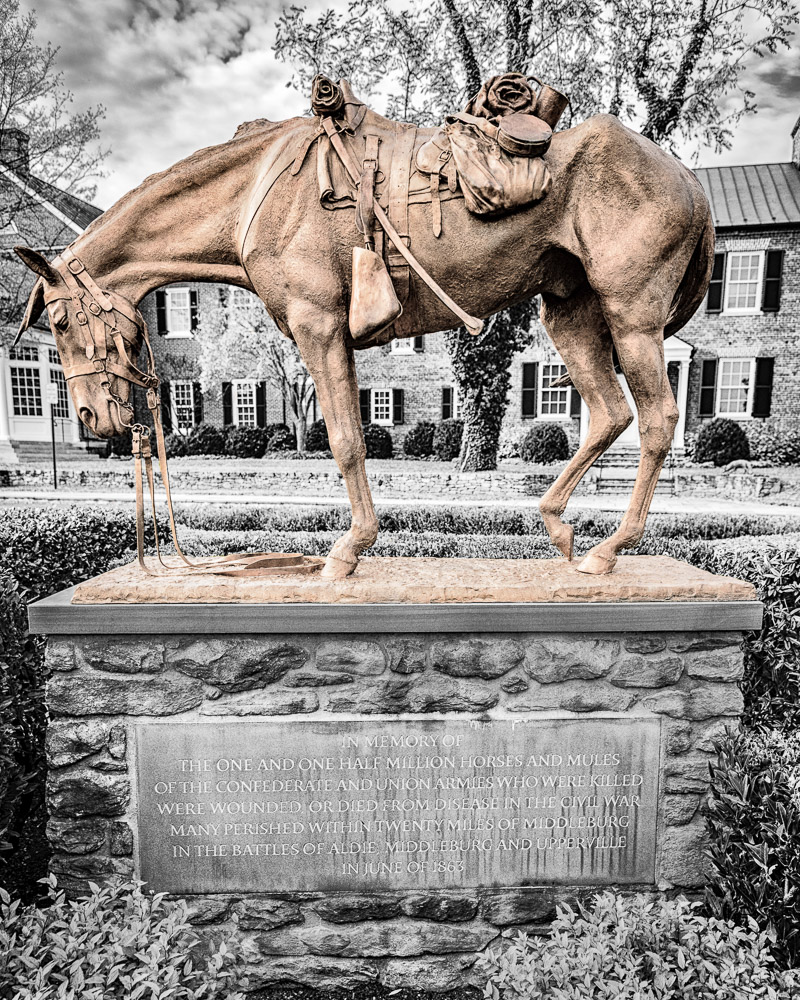