Enough of the holiday.  Today’s post honors George Washington and the gallant men of the Continental Army.  These images are of a single gun and crew which I found alongside Fort Mercer in the Red Bank Battlefield on the Jersey side of the Delaware River in Gloucester County.

There were four Continental Army Artillery Regiments in 1777 when the Battle of Red Bank took place.  I believe that this reenactment is of a gun unit from the 4th Regiment, which was also known as Proctor’s Continental Artillery Regiment.  It was made up of eight companies from eastern Pennsylvania, which would make it the most appropriate unit to have been stationed at Fort Mercer and seen action at Red Bank.  UPDATE #1 – Following the comment from Bob Heffner, I now know that this reenactment group is the West Jersey Artillery.  This group of living history enthusiasts recreates an actual New Jersey state artillery regiment the fought in the American War of Independence from 1776 until 1781.

Fort Mercer was one of two forts constructed in 1777 on the Delaware River.  Its purpose, along with Fort Mifflin on the west bank of the river, was to block the approach to Philadelphia.   So long as the Americans held both forts, British navy ships could not reach Philadelphia to resupply their army.

The Battle of Red Bank took place on October 22, 1777 when 900 Hessian Troops attacked the fort.  They were repelled with heavy losses to the Hessians  (377 killed and wounded with 20 missing or captured) mainly due to the devastating cannon fire from the artillery in the fort.

It should be noted that this was a short-term victory for the Continental Army.  After the later loss of Fort Mifflin, Fort Mercer was abandoned without a fight when Lord Cornwallis landed 2,000 British troops nearby on November 18, 1777

This looked to be a professional photo-shoot as there was a photographer standing in amongst the reenactors giving positional instructions as well as an assistant who held the camera whilst all the pointing and deliberating was going on.  As I had just stumbled upon this scene I tried to both keep out of the everybody’s way and keep the other photographer out of my shots (he was wearing the brightest light blue ski jacket possible which proved hard to avoid).  Just to make my job harder, behind the reenactors was the James and Ann Whitall House which would have provided the perfect background apart from the fact that the grounds were under repair which meant there was a Bobcat excavator and lots of orange safety fencing between the artillerymen and the house.  UPDATE #2 – I now know this was not a photo shoot.  As you can see in a comment below, the West Jersey Artillery was helping film an episode of the cooking show A Taste of History on PBS with Chef Walter Staib, the owner of City Tavern.  The episode will air this summer or fall. 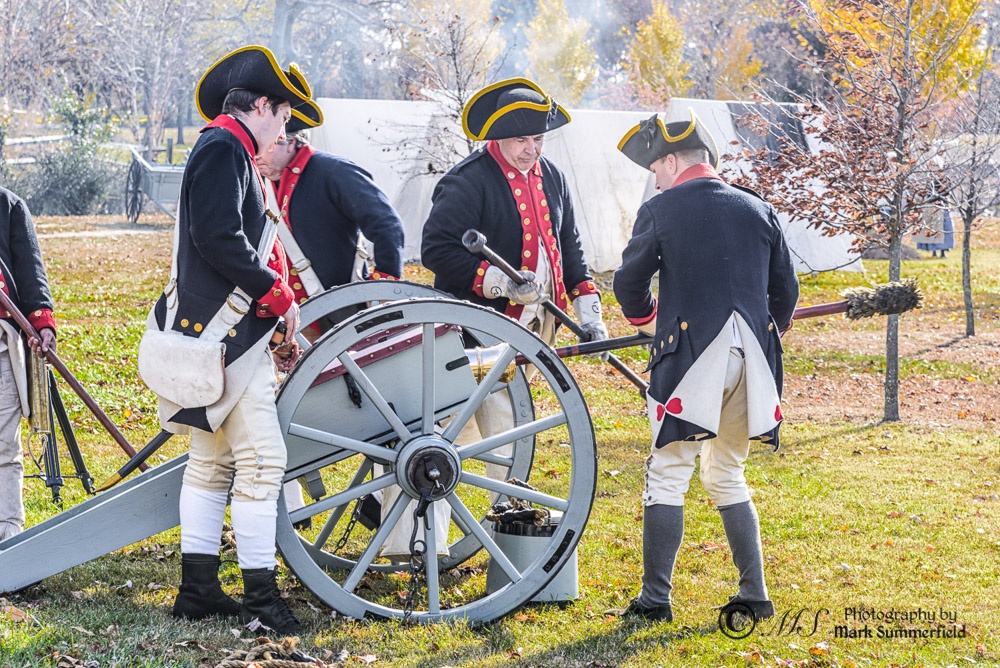