The Herns Mill Covered Bridge is located just outside Lewisburg, West Virginia.  It was built in 1884 by order of the Greenbrier, West Virginia County Court. Road commissioners for the Lewisburg District of the County, Harvey Handly and J.W. Johnston, had been ordered in the January of that year to examine and report on the existing bridge over “Millicans” Creek near the mill of S.S. Herns. On submission of their report, the court ordered the two commissioners to take the necessary action to have the bridge rebuilt.

On July 9, 1884, the two commissioners, together with a third, John, D Arbuckle, submitted their order to the court stating the bridge had been completed according to the contract. Drafts were then issued for the total sum of $800. The names of the contractors who built the bridge were not recorded.

The bridge is a local variation on the queen post truss design. It has a span of 53-feet 8-inches and is 10-feet 6-inches wide. The bridge has been heavily reinforced to allow it to remain open to traffic. The original purpose of its construction, to provide access to the S.S. Herns Mill, is no longer valid as the mill has long ceased to exist.

The Herns Mill Covered Bridge was listed on the National Register of Historic Places in 1981. The comment at the end of the nomination for listing stated: “If proper steps are not soon initiated to upgrade and restore the bridge, it will soon deteriorate beyond repair”. I am glad to say, and as can be seen in the images here, the necessary restoration work was undertaken. In 2000 new concrete abutments and steel I-beams were installed. Replacement portal timbers as well as new siding and a new roof were fitted. The work has ensured that the beautiful covered bridge remains an active crossing of Milligan Creek (note the difference in spelling between modern maps and the 1884 court order). 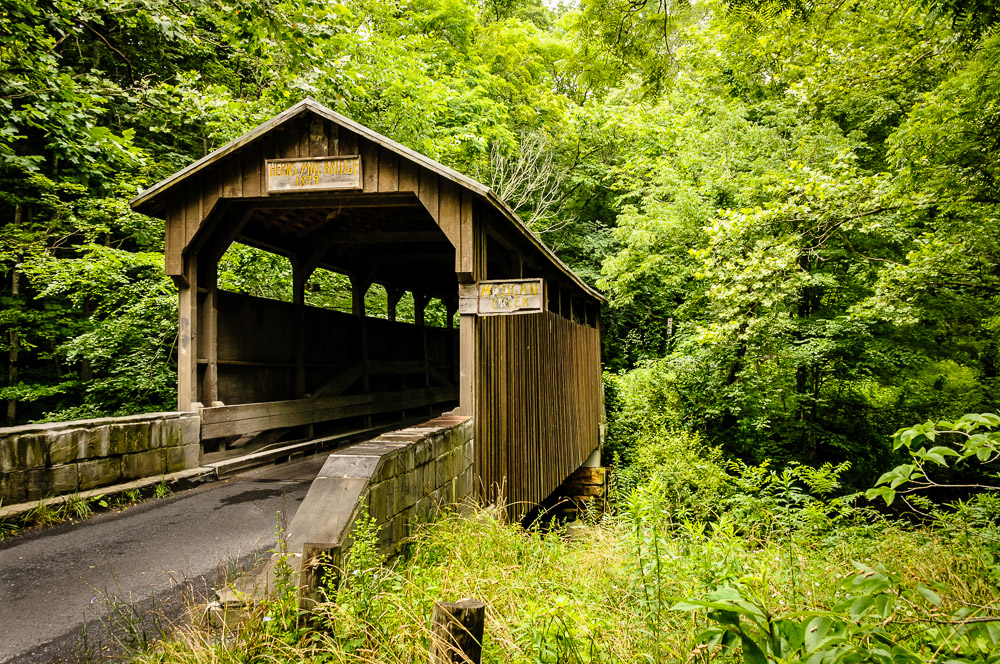