The Falls Church is an Episcopal church from which the city of Falls Church in the Virginia suburbs of Washington DC takes its name. The predecessor to the building we see today was one of the first churches built in the Truro Parish. The parish was created by the General Assembly of Virginia on November 1, 1732. As with many of the parishes created during colonial times, it covered a large area. Included within its boundaries were the modern counties of Arlington, Fairfax and part of Loudoun as well as the cities of Alexandria, Fairfax and Falls Church.

The first church on the site was completed in 1734. The wooden, weatherboard building was forty feet by twenty-two with a thirteen foot pitch roof. It was designed and built by Colonel Richard Blackburn. It cost 33,500 pounds of tobacco.

The name, “The Falls Church” came from its geographic location. At the time Truro Parish only had a few, widely spaced churches. This one was identified as the one “near the falls” of the Potomac River. The Falls Church was the name commonly used after 1757.

By 1762 the original wooden structure was judged to be “greatly in decay”. The following year, church wardens George Washington and George William Fairfax took responsibility to contract for the construction of the new building. In 1765, prior to the commencement of construction, the Truro Parish was divided. The Falls Church became the seat of the newly formed Fairfax Parish.

Construction of the new brick church began in 1767. It was finished in late fall of 1769. Designed and built by Colonel James Wren, the building is the oldest church building in Virginia, north of Quantico. The design was also used for Christ Church in Alexandria which was completed in 1773 and the Pohick Church in Lorton, Virginia in 1774.

In 1779, Thomas Jefferson wrote a proposed act to establish religious freedom in Virginia, but it was not immediately adopted. Finally in 1786, the Virginia Act for Establishing Religious Freedom, based on Jefferson`s 1779 draft, was passed by the General Assembly. The act included forbidding the use of taxes to support any church, a position which was accepted for the entire United States by the adoption of the First Amendment in the Bill of Rights a few years later. One result was that The Falls Church was virtually abandoned.

The Falls Church reopened in the 1836 after Henry Fairfax paid for the restoration of the building. Services continued until the building was used by Union troops first as a hospital and then a stable during the Civil War.

The Federal Government repaired and paid for damages caused by the Union forces. The church reopened in 1873. There has been an active congregation in the Falls Church ever since.

Like many of the buildings featured on my web-site, The Falls Church is listed on the National Register of Historic Places. It was added to the register in February 1970. 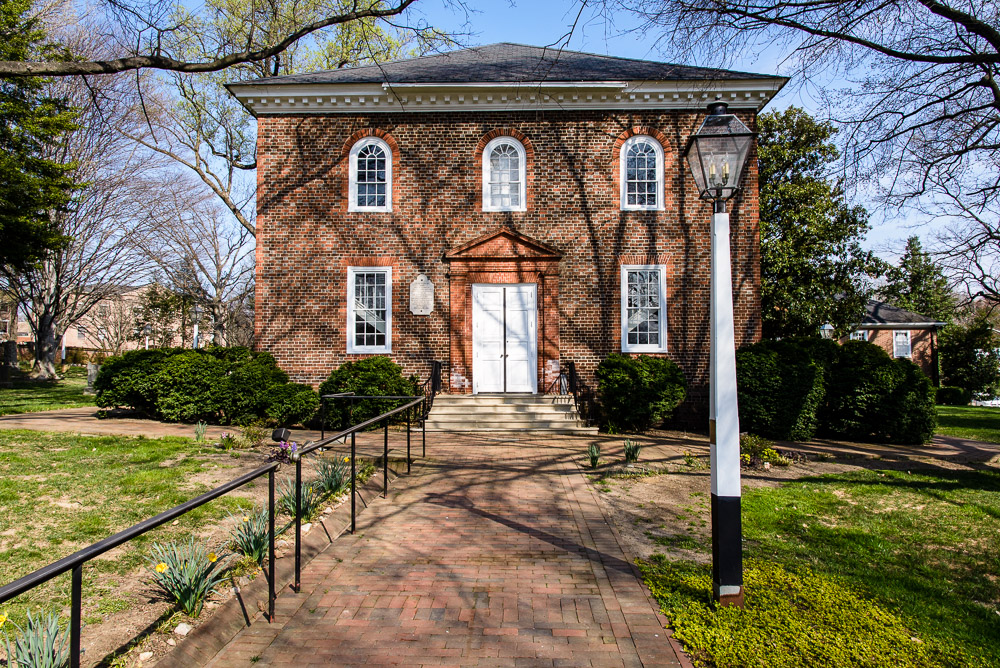