The Dartford Library was opened on January 1, 1916.  The one-story red brick building was one of only two public libraries open in the South of England during World War I.  The library is one of 660 Carnegie libraries in the United Kingdom, being built with the aid of a grant from Scottish American philanthropist Andrew Carnegie.  The building was designed by the Dartford Town Surveyor, Thomas Edward Tiffin.

The library nearly did not open.  Dartford was an important center for the manufacture of munitions for the Great War.  The output from the nearby Vickers factory multiplied.  This increased demand needed workers, most of whom were women.  Shortly after appointing the first Librarian in September 1915, the Dartford Borough Library Committee received notice from the Ministry of Munitions that the building was required to provide accommodation for the increasing number of workers being drafted into the area to work in the munitions factories.

A compromise was found allowing the library to open as originally planned.  It was proposed that the munitions workers would be housed in the Westgate Council Schools.  The displaced children would use the magazine and reading rooms in the new library building.  Preparations continued for the opening of the library, which was originally set for December 4, 1915.

Two weeks before the planned opening, the library’s future was again put in doubt.  A new notice from the Ministry of Munitions stated that both the Westgate School buildings and the library were now both needed to provide accommodation for the munitions workers.  After negotiations between the Council and the Ministry, the library was deemed surplus to the Ministry’s requirements and allowed to open.

When it initially opened, the Dartford Library was for the use of local residents only.  The soldiers and airmen stationed in the area were not permitted to use the library.  This restriction was later lifted.  The Library Committee Minutes provide evidence of many expressions of thanks received from soldiers, nurses and the munitions workers based in the area.  It is noted that, in particular, Australian, Canadian and New Zealand troops made considerable use of the library.

During 1918, special arrangements were made to provide library services to the nearby Orchard Hospital on the outskirts of the town.  Prior to the war, the Orchard Hospital was not in use.  In 1915 it became a military hospital for the wounded troops.  In October 1916, the hospital was handed over to the Australian military authorities, becoming the 3rd Australian Auxiliary Hospital.  The library’s outreach service was used by both staff and patients at the hospital.

In April 1919, the Dartford Council passed an Act whereby the Dartford Library and the Dartford Museum would become one institution.  There had been private museums in Dartford since the latter half of the 18th Century.  Both Dr John Latham, discoverer of the Dartford Warbler, and John Dunkin, a well-known local printer and author of the History and Antiquities of Dartford, both had private museums.  The establishment of a museum in the town open to the public, though, was brought about by Mr. E.C. Youens, a local photographer and antiquarian.

Mr Youens brought together a collection of items which were shown to the public in the Congregational Church on West Hill in 1906.  This exhibition was a great success.  A committee was formed to investigate the possibility of a permanent town museum.  The matter was brought before the Dartford Council in April 1907.

By November 1907, the Council had adopted the 1845 Museums Act, paving the way for the establishment of a permanent museum.  Mr Youens was the Honorary Curator of the collection which was already being gathered at the Technical Institute.  Adverts were placed in the local newspapers seeking donations.

With the passing of the 1919 Act, it was decided to transfer the collection from Technical Institute to the Dartford Library.  This allowed the general public more convenient access than was possible in its original location.  The museum room in the library building was opened in 1921.  The Dartford Library building was extended in 1937.  This provided the space that the collection still occupies today. What is now officially called the Dartford Central Library and Museum is situated in the center of town on Market Street.  It is a Grade II Listed Building on the National Heritage List for England (NHLE),  deeming it of outstanding architectural merit. 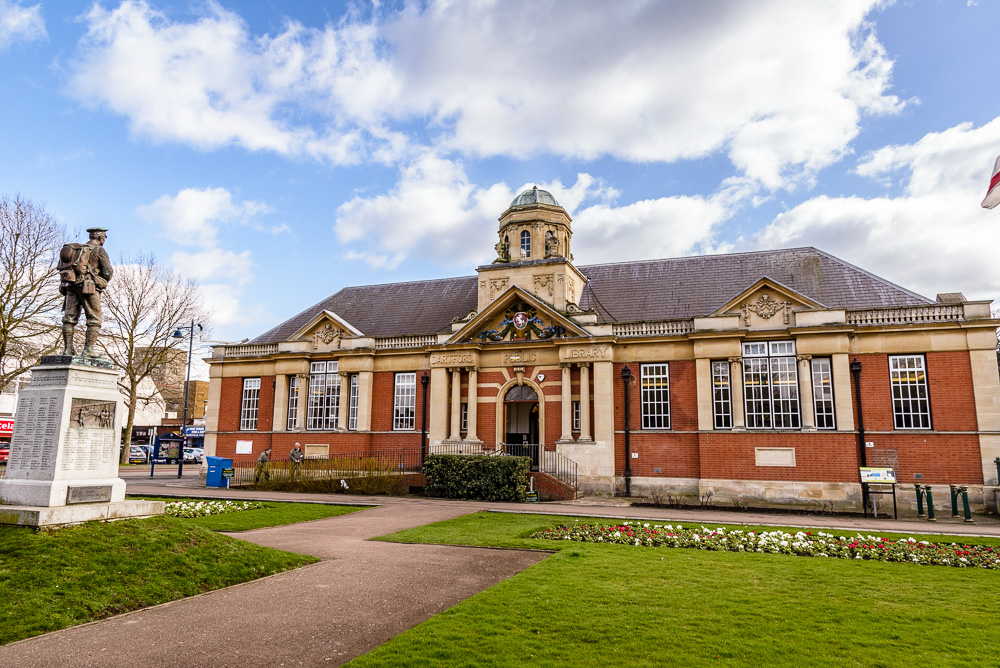 Article Name
Dartford Library
Description
The Dartford Library was opened on January 1, 1916.  The one-story red brick building was one of only two public libraries open in the South of England during World War I.  Designed by the Dartford Town Surveyor, Thomas Edward Tiffin, it is one of 660 Carnegie libraries in the United Kingdom.
Author
Mark Summerfield
Publisher Name
Mark Summerfield
Publisher Logo