The Clarke County Courthouse was built in 1838 upon the formation of the county. Officially classified as a combination of the Colonial Revival and Neo-classical architectural styles, it could also be simply be said to be a fine example of the American Temple Revival style. It is one of a group of courthouses whose design is unique to Virginia. The prototype for the general design was the Virginia State Capitol in Richmond along with other public buildings designed by Thomas Jefferson.

Clarke County in North Western Virginia was formed in 1836 when it was divided off from Frederick County. The town of Berryville was designated as the county seat presumably because of its location at the intersection of two of the major roads through the county – Winchester Turnpike and Charlestown Road. Although chartered almost 40 years earlier, Berryville was still a small town. The 1810 census recorded that the town had at least 25 homes, three stores, an apothecary, two taverns, and an academy. It was not much larger in 1836. The court order designating Berryville as the courthouse town also provided for the use of one of the old academy buildings to serve as the temporary court until an appropriate building could be constructed.

In July 1837, two acres of land on what is today known as North Street were purchased for $300. Two plans for the courthouse were submitted, both by the county magistrates. The plan by David Meade was accepted. Meade’s original plan has not been found. However, we know his plan was the winner through the court order accepting the plan. The commissioners supervising the construction were authorized to enlarge Meade’s plan “so as not to exceed fifty-four feet in length and forty-two feet in breadth”. Meade never saw the completion of his building as he died in November 1837.

According to local tradition, the original Clarke County Courthouse burnt down in 1850 and was rebuilt on the same foundations. However, no description of a fire can be found in newspapers or other records of the time. Also, although all the early court records were stored in the courthouse, only a few volumes of marriage registrations were lost. This all suggests that the fire damage, if any, was minimal.

The courthouse continued in use until 1977 when a replacement building of quite similar design was constructed on the same land just to the south-east of the original structure. The original building continues in use as the General District Court Building and county office building.

The Clarke County Courthouse was listed on the National Register of Historic Places in 1984. It is also included with the separately registered Berryville Historic District. 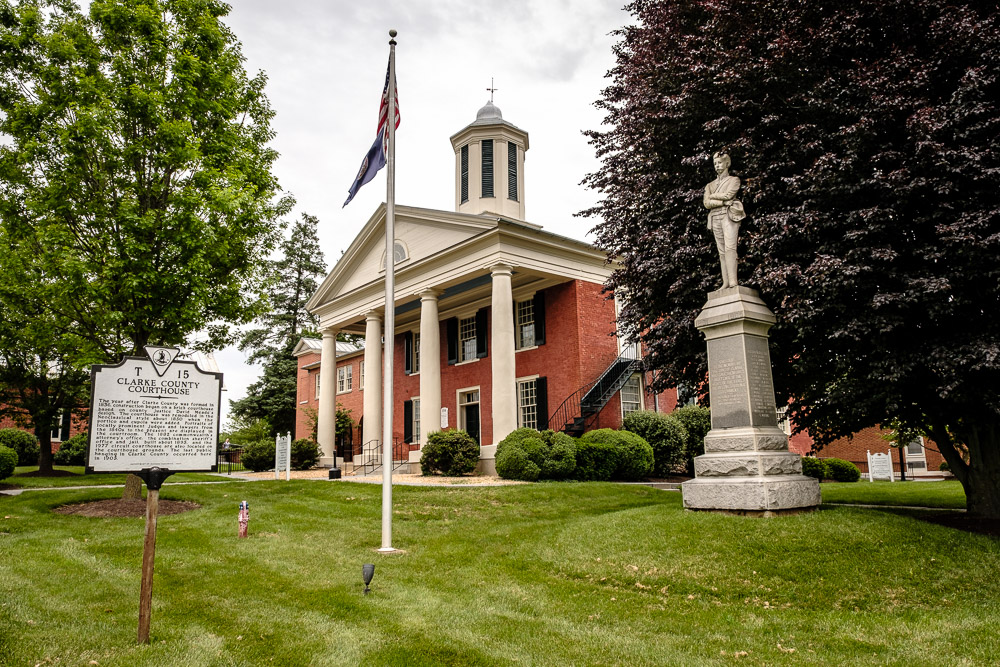