After visiting a civil war era fort just outside Savannah, Georgia in the last post we move south into the Caribbean and back in history a hundred years or so to a fort built in the first decade of the 18th century.  Fort James is one of the two forts which guard the entrance to St. John’s Harbour, Antigua.

There was, in fact, an earlier defensive system on the site.  In 1680, Colonel James Vaughn had granted rights to King Charles II of England for the purpose of building a fort to guard the entrance to St. John’s Harbor.  An Act was passed in 1683 to erect the fort on the “uttermost point on the north side on St. John’s”.  Simple earthworks were built.  The construction probably took place during the earlier years of the reign of King James II (1685 – 1688), and hence took on his name.

The earthworks were developed into a proper fort in the early years of the 18th century.  In January 1704, the Colonial Government voted funds for building up Fort James.  The town of St. John’s had gradually grown more important than Falmouth on the south side of the island (home to the naval dockyard known for its connection to the early career of Admiral Nelson).  There were constant rumors, as well as a quite real threat, of a French invasion, which helped push forward the development of the fort.

A “new fort” was constructed on the site beginning in 1739.  The former fort was merely an enclosure and battery on the headland, while the new fort protected the other site by a landward ditch and covered a much larger piece of land.  A high enclosure wall was erected around the fort at this time.  There is is a plaque near the entrance gate in this wall commemorating this third construction:

The First Stone was laid by
WILLIAM ISAAC MATHEW
The Right Grand Master
With his Grand Officers
and
The Right Worshipful the Masters and
The Wardens and Brothers
of
The three Lodges of free and accepted Masons
of Antigua
November 15, 1739

Overall, today Fort James remains in relatively good condition.  There are two buildings remaining from the old fort – The Master Gunner’s house and the barracks and canteen.  The cannons seen in these photos are sited on the seaward wall of the extension created by the “new fort”.  At the end of this wall is, what I believe to be the Captain’s Quarters.

We know that in 1840, the Captain’s salary was ￡150 per annum, not much but this was not the Captain’s total remuneration.  At about this time, it was the custom, although not the law, that every ship passing the fort to enter the harbour, no matter what size, had to pay a fee of 18 shillings to the Captain of the Fort.  If not paid, a warning shot across the bows of the offending vessels came from one of the cannon on the seaward wall.  These cannon could do some damage, to say the least.

The cannon in the image above, inscribed with “W.Co” on the trunnion indicates it was manufactured by Walker & Co. of Rotherham, Kent.  It is a 24-pounder dating from around 1800.  Its range with an 8lb charge at a 10 degree elevation would have been about 1.5 miles.  Aimed a target at a range of about 100 yards away and loaded with a single shot charge of 4lb, the cannon ball penetrated 3ft of oak planks bolted together.  Loaded with a double shot, it penetrated 5ft 2in!  It is no wonder that the Captain did not have much trouble collecting his fee.

In the next post we will enjoy the view from the Captain’s Quarters and see how the fort commanded the entrance to St. John’s Harbour, although the ships will be a little different. 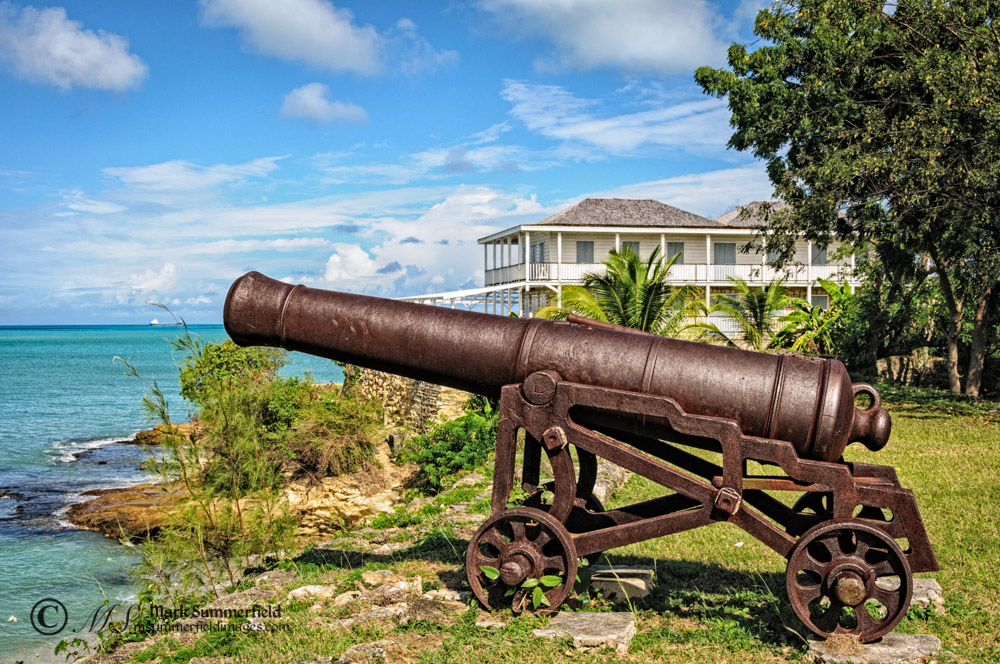