Gloucester County is on the Virginia’s Middle Peninsula. It was formed in 1651 from York County to the south across the York River. The Gloucester County Courthouse is generally accepted to have been built in 1766. There are claims, though, that it may have been built much earlier. There is a 1684 record in Middlesex County to the north referring to a brick courthouse in Gloucester “lately built”. Evidence suggests this building was in a different location and does not survive.

The courthouse is considered one of the most architecturally sophisticated of Virginia’s colonial courthouses. As with many of the earlier courthouses, it has a T-shaped plan. The facade consists of three sections. The Colonial Revival style portico which shelters the main entrance is a later addition. The two symmetrical wings, though, are original. They have two bays each with six-over-six sash windows. This design differed from the earlier courthouses such as the nearby King William County courthouse which are fronted by an arcaded porch.

When you enter the double doors under the portico you would face the judges in the the court room ahead of you. The side wings contain the judges’ chambers and the jury deliberation room.

The building has been renovated several times and is kept in good condition. In the application for the admission of the Gloucester County Courthouse to the National Register of Historic Places from 1973 it says that the walls, roof framing and possibly the modillioned cornice are original. I cannot find any record if this is still the case.  While court is no longer held here, it is used regularly by county government and the local community for meetings. 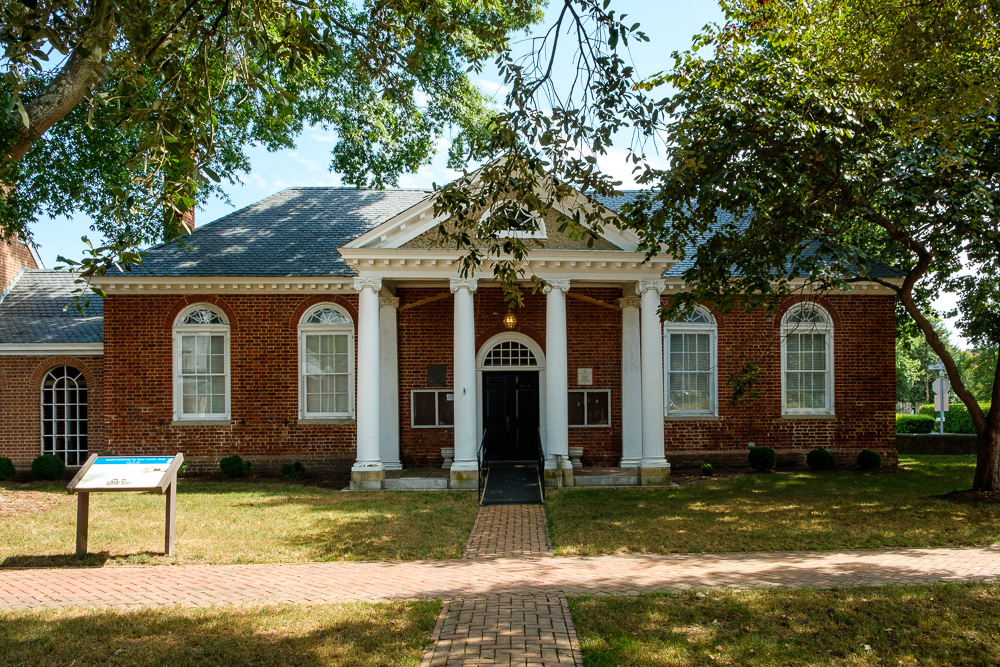