The Morattico Post Office is one of 69 contributing buildings in the Morattico Historic District. The historic district is part of the unincorporated village of Morattico. It is a small watermen’s community situated on a peninsula on the eastern bank of the Rappahannock River in Lancaster County, Virginia.

The community was formed on land purchased by brothers John S. Wheaton and John S. (Jack) Wheaton in 1889. The land was purchased from the creditors of a slave-operated plantation which had fallen on hard times after the Civil War. The village was originally called Wheaton’s Wharf. This is an early indication of the community’s reliance on the commercial benefits of oystering, crabbing, and fishing on the Rapahannock River and nearby Chesapeake Bay. The simple design of the buildings in the village reflect the practical needs of the watermen’s community.

The village was renamed Morattico in 1911. This was the name of the plantation on whose land the village was built. The name, though, goes back much further, being an anglicized version of Moraughticund, a Native American tribe whose primary village was believed to have been in the area. John Smith reported meeting with the Moraughticund during his exploration of the Chesapeake Bay in 1608.

One of the first commercial buildings in the new village was the General Store which was built in 1890. Around this time, the village also had a sizable wharf which served as a steamship stop on the Baltimore to Fredericksburg route.

A post office was established in the village in 1892. The post office was located in other commercial enterprises, including the General Store, until about 1949 when a discrete post office building was constructed. This building is the one still in use today.

Unlike most U.S. post offices, this building is not federally owned. It is privately-owned and rented to the U.S. Postal Service. Although the post office has its own address of 6569 Morattico Road, it is, in fact, located on the property of its owner at 6581 Morattico Road. Befitting the size of the community it serves, the Morattico Post Office is one of the smallest in the United States. It is not much bigger than a large garden shed. It is a simple, one-story gable fronted structure. The only change to the design since it was built is the addition of a porch over the door at the front of the building.

The Morattico Historic District, including the Post Office, was listed on the National Register of Historic Places in November 2011. 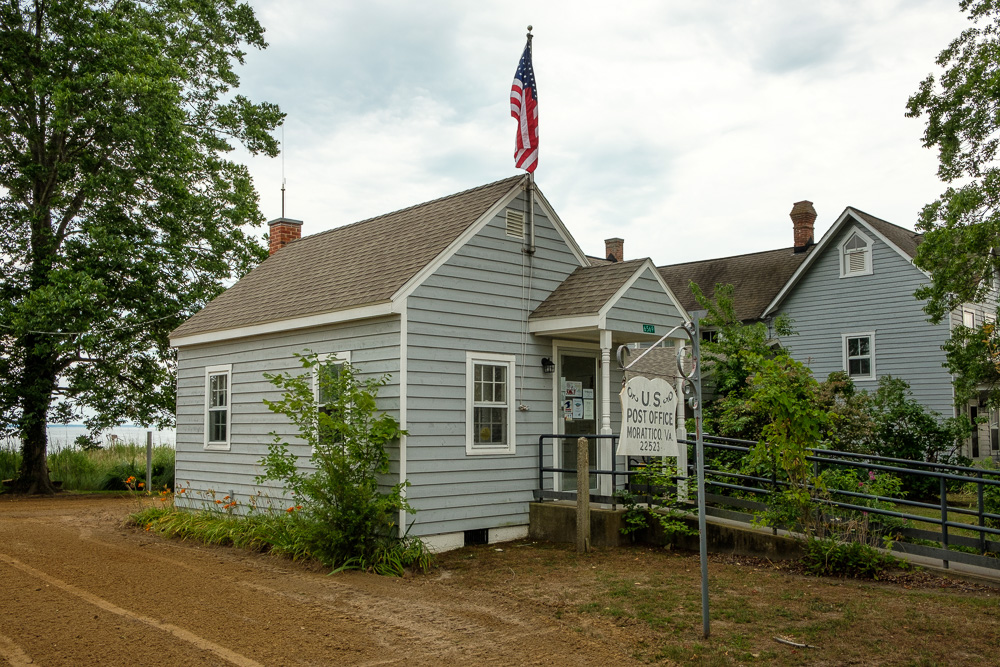 Article Name
Morattico Post Office
Description
The Morattico Post Office is one of 69 contributing buildings in the Morattico Historic District. Befitting the size of the community it serves, it is one of the smallest in the United States.  It is not much bigger than a larger garden shed.
Author
Mark Summerfield
Publisher Name
Mark Summerfield
Publisher Logo