The latest version of Perfect Effects by OnOne Software comes with a lot of new presets as well as the “Perfect Brush”.  The Perfect Brush works exactly the same as Auto Mask in Lightroom making the painting in of masks much quicker.  In fact, I was able to produce almost three times the number of finished images in a session than before due to the speed with which I was able to paint in masks using the Perfect Brush.  Today’s image of Mitchell’s Folly, an antique shop in Eureka Springs, Arkansas, would not have been able to have been created as quickly if it was not for the Perfect Brush.

This image is from a single RAW file (I have included the unprocessed original file at the end of this post so that you can see just how flat and lifeless it was).  I first processed the RAW file three times at -2, 0 & +2EV taking the resultant three files into Nik Softwares HDR Efex Pro.  My intent was to create as neutral an image as possible from the HDR combination and then experiment with the different presets and filters in Perfect Effects.  The presets I used came from the bonus pack which OnOne was offering if you purchased the latest version of their software by November 15.  If any of you have watched some of Brian Matiash’s tutorials on the OnOne Web-site will know these presets as they are based on effects he creates during these shows.

The first effect, which was applied to the whole image was a Preset called “Seattle Holiday“.  This created the nice overall textured look you see above but still left the image a little flat.  The cure was to then start applying other effects and filters using the Perfect Brush.  The windows and door had a preset called “Get the Gauze” applied.  This both darkened these areas but also removed some of the warm tone from the first preset.

Next I darkened the four pillars in the foreground of the image as they were somewhat distracting.  I also darkened and added some extra texture to the pavement by using the “Grunge” preset.

All of the wonderful displays outside the shop were treated next by brightening and adding additional clarity first to the horse and then to a lesser extent the two signs above the door as well as the paintings stacked either side of the door.  Lastly to link it all together I brightened the tiles surrounding the door and windows.

There is a lot to take in in this image and I hope, through my processing, to have created some logical pathways for the viewer to follow as they explore this image.  I would be interested to hear what route you followed through this image to see if my plan actually worked. 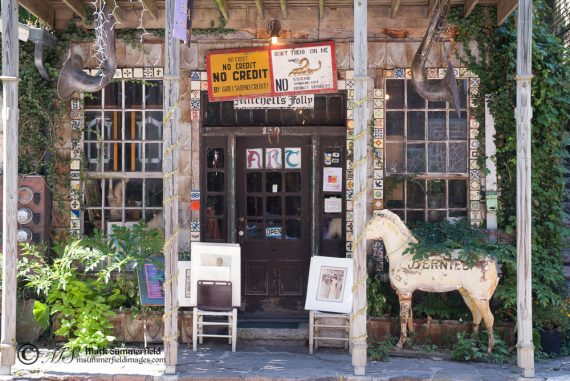 This is the original image, which as I said at the beginning of the post is pretty lifeless.  I cannot stop singing the praises of the new version of Perfect Effects with the Perfect Brush.  For anyone interested in trying Perfect Effects they have a free trial download.  If you like the product and would like to purchase it please use the code MSIMAGES for a 15% discount.