Situated atop a small hill between the Superstition Mountains and the Goldfield Mountains, the settlement of Goldfield got its start in 1892 when very rich, high grade gold ore was found in the area. A town soon sprang up and on October 7, 1893 it received its first official post office.

This new find, coupled with the legend of the Lost Dutchman Mine, which had been circulating for years, led plenty of new miners to the area and in no time, the town boasted three saloons, a boarding house, a general store, brewery, blacksmith shop, butcher shop, and a school. For five years the town boomed until some 1,500 souls were residing in the burgeoning city.

But like other gold camps, Goldfield’s bustling days were quickly dashed when the vein of gold ore started to play out and the grade of the ore dropped even more. Just five years after it began, the town found itself quickly dying. The miners moved on, the post office was discontinued on November 2, 1898, and Goldfield became a ghost town.

But Goldfield was obviously not destined to die permanently. In 1966, Robert F. “Bob” Schoose, a long time ghost town, mining, and treasure-hunting enthusiast made his first trip to the Superstition Mountains and instantly fell in love with the area. He moved to Mesa, Arizona in 1970 and soon began to dream of owning his own ghost town. He had heard of the old site of Goldfield, but upon inspection, he found little left other than a few foundations and rambling shacks. He and his wife, Lou Ann, then located another five-acre site that was once the location of the Goldfield Mill and decided to rebuild the old town there. They purchased the old mill site in 1984 and it opened for business in 1988.

The Blue Nugget is one of the merchant shops in Goldfield Ghost Town on N. Mammoth Mine Road in Goldfield, Arizona. 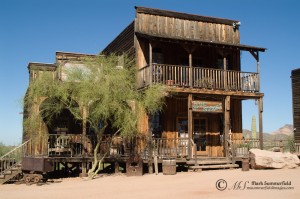 My original image, seen on the left, was very flat and lacking detail, but after processing with HDR Fx Pro it was beginning to take shape.  Although the details had been brought back in the structure, I felt there was still something else which could be done to elevate this image to the next level.  After experimenting with some of the effects on On-One’s Photo Effects, I opted first for an Acid Burn effect followed by a Textured Scratch finish.  This produced an almost water-color effect but with an aged look appropriate for this particular building.