The one room schoolhouse on Fossil Creek Road is known as the Strawberry Schoolhouse even though it is located west of the town of Strawberry, Arizona.  It is the oldest standing schoolhouse in the state.  Strawberry is located in North Central Arizona in what is now  Gila County.  The schoolhouse, though, owes its existence to the residents of the neighboring Yavapai County in what at the time was the Arizona Territories.

It was not until the 1860’s that settlers began to move into the Strawberry Valley area.  Prior to that the inhabitants had been mainly from two Indian tribes: the Tonto Apaches and the Southeastern Yavapai.  The first settlers came as a result of the Civil War when the soldiers forced their way into the area.  Many more arrived around 1875 when gold was discovered in the Strawberry area.  A further influx occurred between 1878 and about 1890 when Mormon settlers began to inhabit the region.  It was during this third phase of settlement growth that the schoolhouse had its founding.

As the story goes (from the Strawberry Schoolhouse web-site):

A local dispute over the site for the school building ensued. A plan was devised, and it was determined that two cowboys, using a calf rope, would count the number of lengths between the Hicks-Duncan cabin on the west end of the valley and the Peach cabin on the east end. They retraced their steps to the mid-point. There the one-room log school was built and still stands.

Construction began in the autumn of 1885 with the schoolhouse opening for both teaching and social gatherings in the following year.  The schoolhouse was built of fine pine logs that were cut and dragged to the site, squared with a broad axe and adze, then hoisted into position. Shingles were split for the shake roof and glass windows were installed, two on the east side and two on the west. They were double-hung and could be raised and lowered. A bell hung over the door on the south side and a wood burning stove sat in the middle of the room. The interior was tastefully finished with wallpaper and wainscoting and neatly furnished with desks and blackboards resulting in what was well above the standard for such a schoolhouse at the time.  As the schoolhouse was also to serve as a meeting place, social center and, even, a church, an organ was included in the furnishings.

The school remained under Yavapai County jurisdiction until a change in the county boundary in 1889. As part of Gila County, it became District #11.  Due to the small number of students the school closed in 1907.  It reopened a year later and remained in constant use until its permanent closure in June 1916.  With all the school furniture removed, the building was used as a temporary residence by many newcomers to the valley. Moveable parts were “borrowed” and it slowly became uninhabitable. By 1961, nothing remained of the structure but the log frame and it was “for sale”.

Fred Eldean, an official in the Page Land and Cattle Company, bought the building and site and gave the deed to the Payson-Pine Chamber of Commerce. By 1967, local residents had restored the old structure to a point where it was secure and weather-proof. By this time, it belonged to the Arizona Historical Society. In 1979 and 1980, the newly formed Pine/Strawberry Archeological and Historical Society decided to restore the interior and open the school to the public. The Strawberry School was formally dedicated as a Historical Monument on August 15, 1981.  The Schoolhouse is open mid-May to mid-October, Saturdays from 10:00am to 4:00pm and Sundays 12 noon to 4:00pm.

Have you ever wondered what it was like to attend a one-room school, to be in the same classroom as your older brother or younger sister, or to have your teacher live with your family for part of the school year?  Although not specifically about the Strawberry Schoolhouse, these two highly recommended books give great insight into what it was like:

If you plan on visiting the Strawberry Schoolhouse, here are some other places in the area you may find interesting 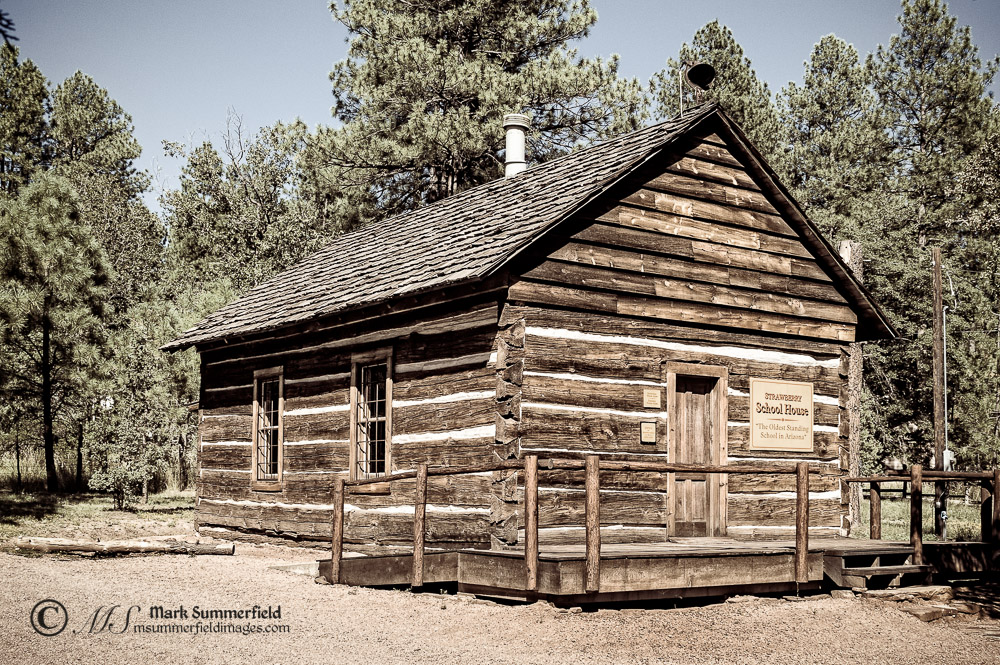