The first true steam locomotive with a 2-8-0 wheel arrangement was ordered by the Lehigh and Mahanoy Railroad and built by Matthias Baldwin in 1866. The design was given the name “Consolidation” by the Lehigh and Mahoney in honor of the recent consolidation of the Beaver Meadow, Penn Haven & White Haven and Lehigh & Mahanoy railroads into the Lehigh Valley. The name was almost globally adopted for all locomotives of this wheel arrangement.

The Consolidation became the principal hauler on most main lines. More “Consolidations” were built than of any other wheel arrangement. It was considered to be the ultimate heavy freight locomotive. Its forte was starting and moving ‘impressive loads at unimpressive speeds’. Roughly 23,000 were built for use in the USA and 12,000 for export. The practical limit of the design was reached in 1915 because the relatively small fireboxes and driver wheel diameters no larger than 63 inches limited both steaming capacity and speed.

This Consolidation was built by the Baldwin locomotive works in Philadelphia, PA in January 1897 for the Norfolk & Western Railway. This particular version of the 2-8-0 perfectly illustrates the strengths of the design – it could haul up to 50 loaded wooden freight cars at a speed of 35 mph. It was sold by the N&W to the Virginia Carolina Railroad in May 1917 when it acquired its current No. 6. It reentered the N&W roster when the Virginia Carolina was purchased by the N&W in 1920. The locomotive continued to see service mainly between Abingdon, VA and West Jefferson, NC until it was retired in 1955.

Befitting it being the oldest locomotive in the Virginia Museum of Transportation’s collection, this image is finished as a sepia-toned black and white using the Perfect Effects plug-in by On-One Software . It is intentionally left a little on the dark side as this was a freight only locomotive and not one of the usually more glamorous passenger engines. 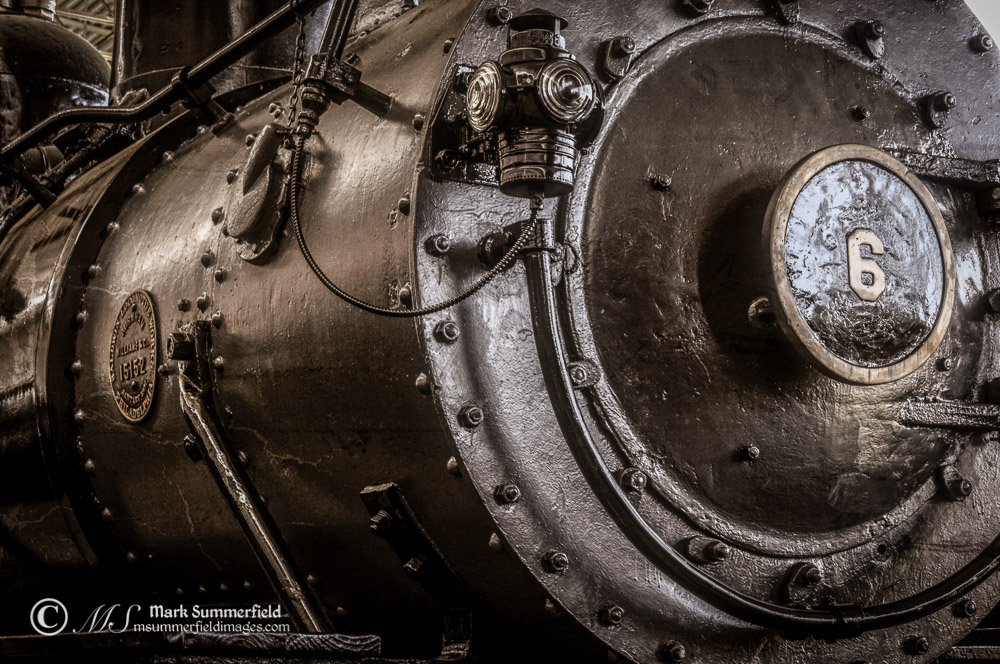