Close to the Santa Fe railroad depot and alongside the tracks now used by the Santa Fe Southern Railway and the New Mexico Rail Runner are some of the old freight depots from the days of the ATSF which have now been converted for modern commercial use.  Fortunately, the conversion to modern commercial usage has not changed the architecture much.  The only real outward change is the replacement of all the doors and windows with metal framed double glazing and the addition of the fencing and new steps for safety reasons.  I thought that neither of these were deal breakers when trying to create a look to the image more representative of the era when this freight depot was operated as originally intended.

This is a hand-held 5 shot bracket series which has been processed through the Merge to HDR function in Photoshop CS6.  If anyone would like to learn how to get the most out of what I believe is the best HDR processing software, especially for removing ghosting caused by movement – either mine during the hand held capture or in the subject – I went through the whole process in the last issue of my monthly newsletter.  Drop me a line through the contacts tab and I’ll send you a copy.

The merged file was then processed in OnOne Software’s Perfect Effects.  Firstly, I decided that the tops of the rails needed to be brightened up to make them look as if they are still in use.  This was achieved by using the Daily Vitamin preset which was then just brushed in to the track tops using the wonderful Perfect Brush. There are some presets in Perfect Effects which come with a mask included so that you can brush the effect in where it is needed.  I used the Brush in Highlights to further brighten the rail tops as well as to bring out additional detail in the roof beams.

Next a favorite preset of mine, Dirty Money, was used to give a nice gritty look to the track bed which had been smoothed out over the years and become rather flat looking.  The preset Grunge was then applied to the building itself.  I felt that this preset was a little too strong, so I reduced its opacity to 65%.  Finally I added the Exagerated [sic] Edges preset at 40% to the whole image to bring out all the details that were included in the original file from Merge to HDR in Photoshop CS6 which was most effective in highlighting the grain in all of the woodwork as well as adding to the details in the platform edge.

Although published back in June 2011, I still think this is the best and most comprehensive guide to HDR post-processing around and the reference I return to more often than anything else, including much more modern books and web publications.

This is the original HDR composite straight from Merge to HDR in Photoshop.  As you can see there is a nice lot of detail in the file allowing the presets of Perfect Effects to work their wonders.  For anyone interested in trying Perfect Effects they have a free trial download.  If you like the product and would like to purchase it please use the code MSIMAGES for a 15% discount.  This discount coupon will expire on March 3rd, 2013. 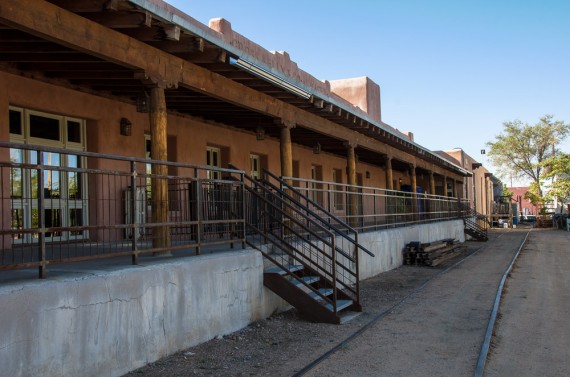