In the early 1940s the railroad system in the United States was in decline in many areas of the country. Up until then the Postal Service had used specialized rail cars to move the mail. With the decline in the rail service, the US Post Office needed to find a replacement. On February 10, 1941 a new service began between Washington DC and Harrisonburg, Virginia using buses instead of rail cars.

The Highway Post Office buses used for this first route were custom-built by the White Company of Cleveland, Ohio. The interior was very much in keeping with the rail cars the bus replaced. The layout was designed to enable the postal clerks inside the bus to process and sort the mail while the bus moved from town to town.

Working on the bus was much more difficult than on the train. While the train moved at a steady pace, the buses were subject to the uncompromising conditions of the American highway system at the time. Poorly maintained roads as well as traffic holdups meant that the clerks in the Highway Post Office Buses were very often bruised and battered as they banged against the racks and tables inside the bus.

The conditions for those on board the buses did not stop the US Post Office from expanding the system. Two more routes opened up in the first year of service. The route between South Bend and Indianapolis, Indiana started on May 3, 1941 with the route between San Francisco and Pacific Grove, California following on August 4, 1941.

The expansion of the system was put on hold during World War II, not resuming until 1946. By the early 1960’s, the Highway Post Office Buses were replacing an average 20 trains a month. Each route was about 150 miles each way servicing an average of 25 post offices.  The length of the route was limited to the  size of the gas tank on the buses.  Anything longer and the buses would have had to stop for fuel wasting valuable time.

The Highway Post Office made its final run on June 30, 1974 over the Cincinnati to Cleveland, Ohio route. The end of the system came about after a major reorganization within the US Post Office whereby mail was sent to central locations within each region to be sorted by high-speed machines.

Two of the Highway Post Office Buses are known to have survived. One of the original White-Company buses for the Washington DC to Harrisonburg, VA route has been preserved by the Smithsonian. It is is currently on loan to the Crawford Museum of Transportation and Industry, Western Reserve Historical Society in Cleveland, Ohio.

A second, seen in the image accompanying this post, is awaiting restoration at the Virginia Museum of Transportation in Roanoke, Virginia. 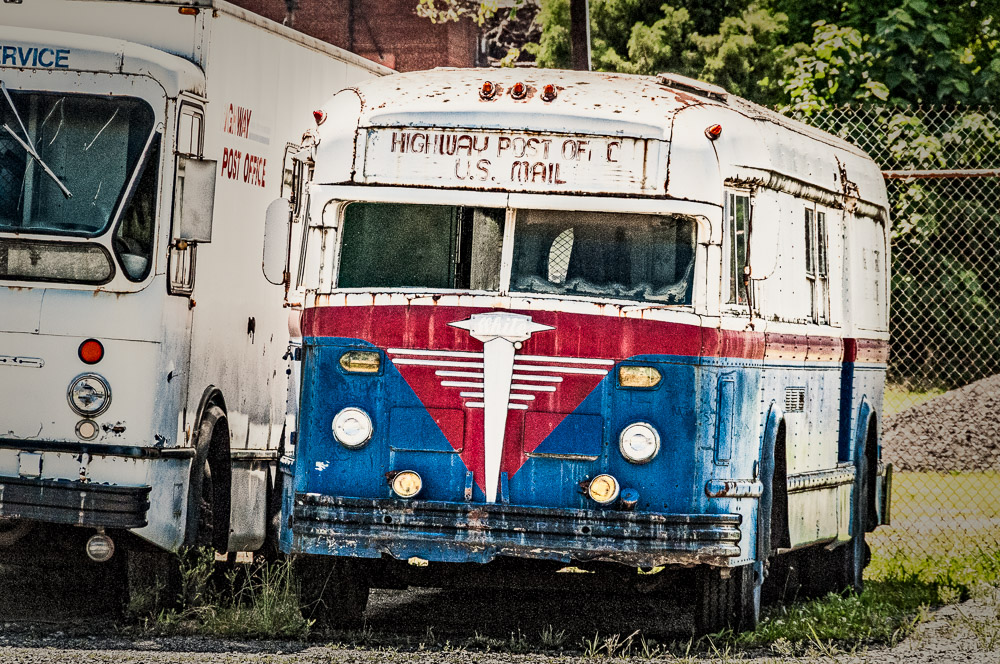