The SD-45 is a diesel-electric locomotive built by General Motors Electro-Motive Division (EMD) between December 1965 and the end of 1971. In all, 1,260 were built for American railroads before being replaced by its upgrade, the SD45-2. A few remain in service but they are becoming rarities. There are, though, six preserved units including the unusually liveried Norfolk & Western number 1776 which can be seen at the Virginia Museum of Transportation in Roanoke, VA.

In the mid-1970s, the Norfolk & Western Railway boldly painted this locomotive with the perfect number for the fever that was speeding across the country—the number 1776—red, white, and blue to celebrate the USA’s Bicentennial of national independence and to demonstrate the railroad’s commitment to America’s strong future.

This particular engine was manufactured in 1970, one of 115 purchased by the N&W. The unit was originally delivered in the “Pevler Blue” paint scheme that was in use by the Norfolk & Western from 1966 to 1971.

Thomas C. Heinrich, a trainee who later became assistant roadmaster at Mullens, WV, knew N&W’s locomotive number 1776 was due for an overhaul, and wrote to N&W President John P. Fishwick in 1973, suggesting its patriotic makeover.

In 1974, the 1776 received its distinctive paint scheme in honor of the 200th Anniversary of the Declaration of Independence in 1976. From 1974 through 1978, the engine proudly headed trains across the 14-state N&W system.

The high nose cab of the locomotive featured an eye-catching circle of thirteen stars on a blue field representing the original thirteen colonies that declared their independence from England in 1776. Striking red and white stripes ran the length of the locomotive.

In 1978, the engine was painted N&W black and continued in service until February, 1988. Norfolk Southern donated the locomotive to the Virginia Museum of Transportation in 1991. The 1776 was returned to its patriotic red, white and blue livery, but this paint job did not last.

A fundraising campaign was mounted in 2011 for a cosmetic restoration of the 1776. The restoration was completed in 2012 in the Norfolk Southern Shops in Chattanooga, TN. 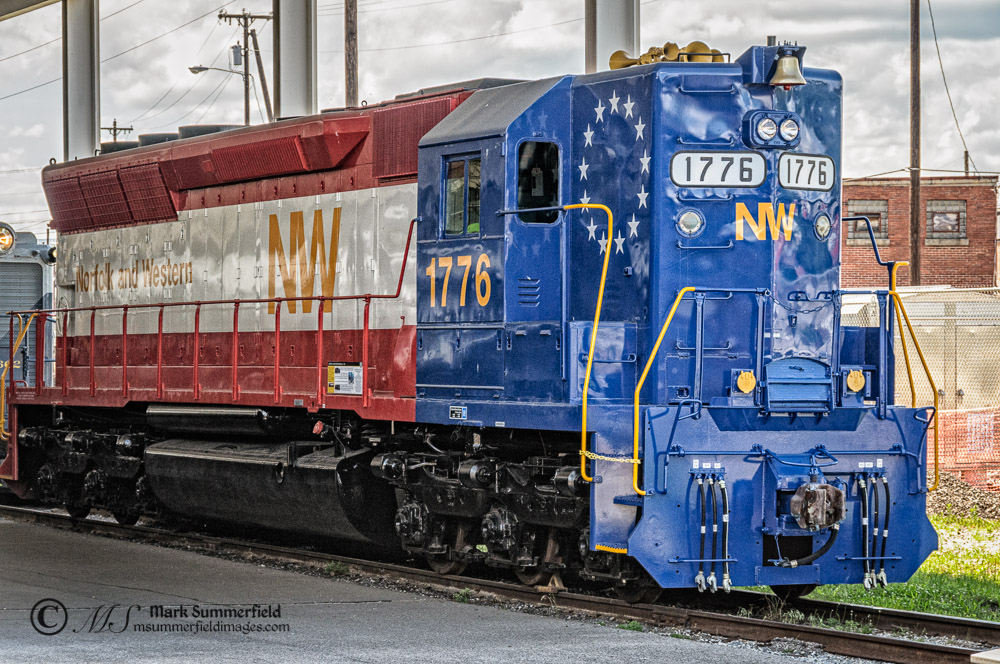