One of the most unusual looking exhibits at the Baltimore & Ohio Railroad Museum in Baltimore is No 305. This is a Camel Steam Locomotive. The name Camel came from the strange arrangement of the engineer’s cab which sat directly atop the boiler.

This odd design which became synonymous with the B&O originated in 1848. By this time, the railroad was in need of more powerful locomotives capable of dealing with its mountainous routes whilst using coal more efficiently. One time B&O employee, Ross Winans, came up with this solution. He introduced a larger firebox placed at the end of the frame. The firebox was so large that the engineer’s cab had to be placed directly over the boiler.

Winan’s original design was based on an eight-wheel configuration. This was later modified by the B&O to produce a ten-wheel locomotive as seen here. Both versions were produced in large numbers before and after the Civil War and were used well into the late 19th century.

Camel steam locomotives were well known for their power and low speed. They were not designed, though, for crew comfort nor safety. The engineer, located directly over the boiler, was extremely hot and uncomfortable. This position also meant that he did not have much of a chance of surviving a derailment. The fireman was located in the tender. He had very little protection from the weather. The separation of the two crew members also made communication very difficult.

This particular Camel steam locomotive was designed by J.C. Davis, Master of Machinery, and built in the B&O Mt. Clare shops in 1869. It was used for passenger service over the 17-mile grade west of Cumberland. It was retired from service in 1892 and put on public display as an example of its innovative and unique design.

No 305 had now returned to where it was built as the B&O Railroad Museum is situated on the site of the Mt. Clare shops. It is located in the roundhouse. This location creates some really difficult lighting conditions especially when there are other exhibits close to the engine as is the case here. The final image seen here has been created to overcome some of the harsh highlights and unfortunately placed shadows which were present on the original raw file.  It was created using a combination of Color Efex Pro from the now free NIK plugin collection and my favorite On1 Photo Effects 10. 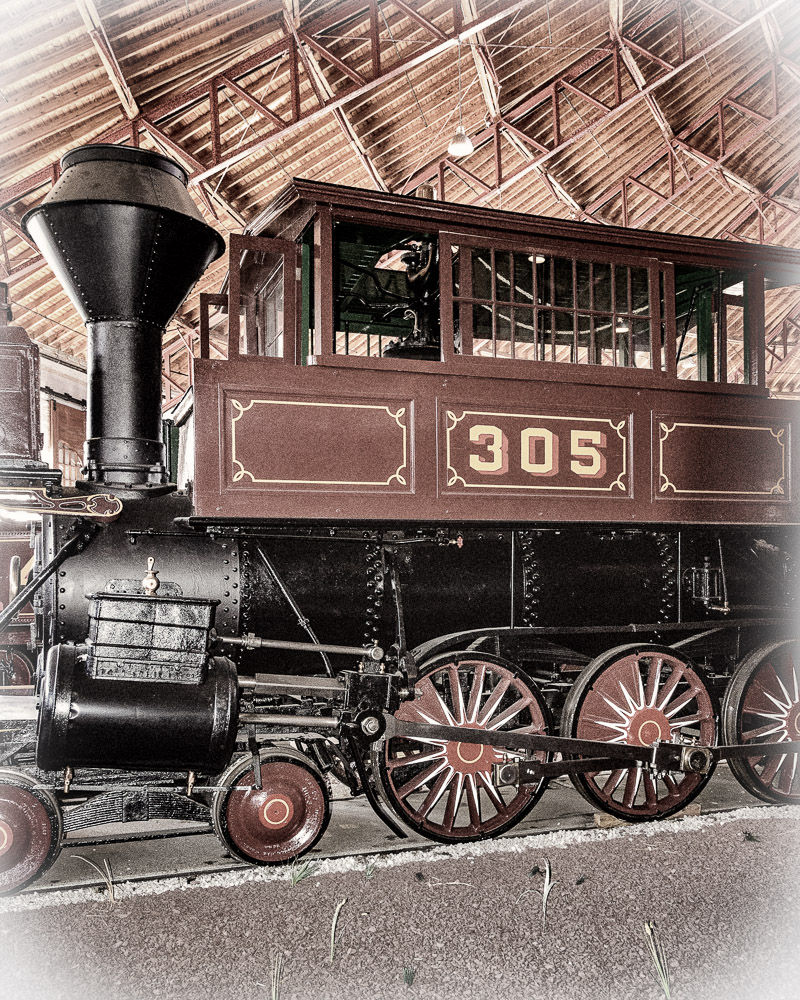