Entering Nuttall Country Store on Ware Neck Road in Gloucester County, Virginia is like stepping back in time. The white clapboard sided building dates back to 1877. In its heyday, it was one of a dozen combination country store and rural post offices in Gloucester County. It is now the last one left.

The business was originally founded as the Arther Tabb Store in 1877. The property was acquired by Richard P. and H.E. Taliaferro in the mid-1880s. The store grew as an important hub for the local rural community when the post office was added by these new owners. By the 1890s the business was doing so well they added the two wings we see today. They also added living quarters to the rear of the store.

Not far from the store was the Hockley Wharf on the Ware River. This was a stopping point for the steamships which operated on the Chesapeake Bay and along the Eastern Seaboard. Having commercial ties with these steamships proved to be a very profitable business for the store.

In August 1933, one of the most damaging hurricanes to hit the Mid-Atlantic states made landfall in North Carolina and continued north. The eye crossed over Norfolk, Virginia with the storm surge producing flooding that would not be surpassed for over 80 years. The low lying areas of the Middle Peninsula, including Gloucester County were severely damaged. One casualty was Hockley Wharf. The steamship trade never returned to the area.

By the time what became known as the 1933 Chesapeake–Potomac hurricane hit, the country store was owned by Rudy Nuttall. Fortunately, the close ties the county store had maintained with the local community allowed the business to pull through. Even today, long after the other country stores in the area have gone out of business the Nuttall Country Store continues to survive.

By the early 21st century, it looked as if the Nuttall Country Store would join the other county stores in going out of business. In November 2007, a group of neighborhood investors banded together to help preserve the building. In 2012, this group became known as the Friends of Ware Neck Store.

The Nuttall Country Store maintains its original charm. The squeaky wooden floors remain as does the US Post Office. Whilst the store has kept many of its original standbys for the local community, the product range has expanded. There is now a wine rack selling imported as well as Virginian wines. The store also has its own “library” where the neighbors drop off books that others, including visitors, can take home. As with many cafes today, it serves made to order sandwiches as well as providing free wireless internet service.

Through adaptation and the will of the local community, the Nuttall Country Store has survived for over 140 years. Long may it continue to do so. 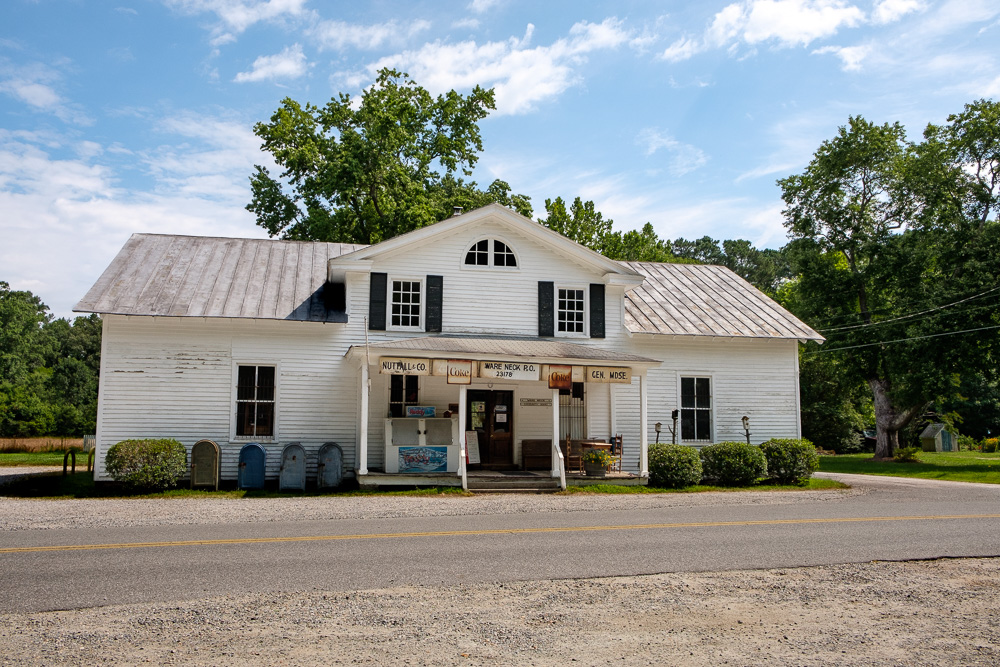