Today we take a look at another of the Colonial Williamsburg craftsmen.   Shoemaker George Wilson moved to Williamsburg from Norfolk, Virginia in the late 1760’s.  He was not alone, though, in supplying footware to the people of Williamsburg.  In all there were about a dozen shoemakers operating in the city at the time.

George Wilson, as we know from an advertisement in the Virginia Gazette, specialized in “Boots and Shoes for Gentlemen”.  He had also advertised the arrival of a “choice Cargo of the best sorts of English leather for all Manner of Mens Shoes and Pumps”.

For a while his business must have been very successful and was more than he could handle.  He encouraged two or three journeymen shoemakers to apply to him “next Door to Mr. Greenhow’s Store in Williamsburg”.  However, the shoemaking business must have been very fickle.  Not only were there other shoemakers in Williamsburg to compete with, there were also the merchants in the colony who imported ready-made shoes from factories in London, Northampton and Bristol, England.

George Wilson’s business, unfortunately, did not last long.  Only a year after looking to hire his assistants, the business, household furniture and working materials of George Wilson, recently deceased, were offered for sale, as there was nobody to take over the business.

Colonial Williamsburg allows the photographer to create both formal and, in this case, semi-candid environmental portraits.  The reenactors are so used to having a camera pointed at them that they continue answering questions and explaining their craft as if you were not there.  All the photographer has to do is wait for that expressive moment to produce an interesting image. 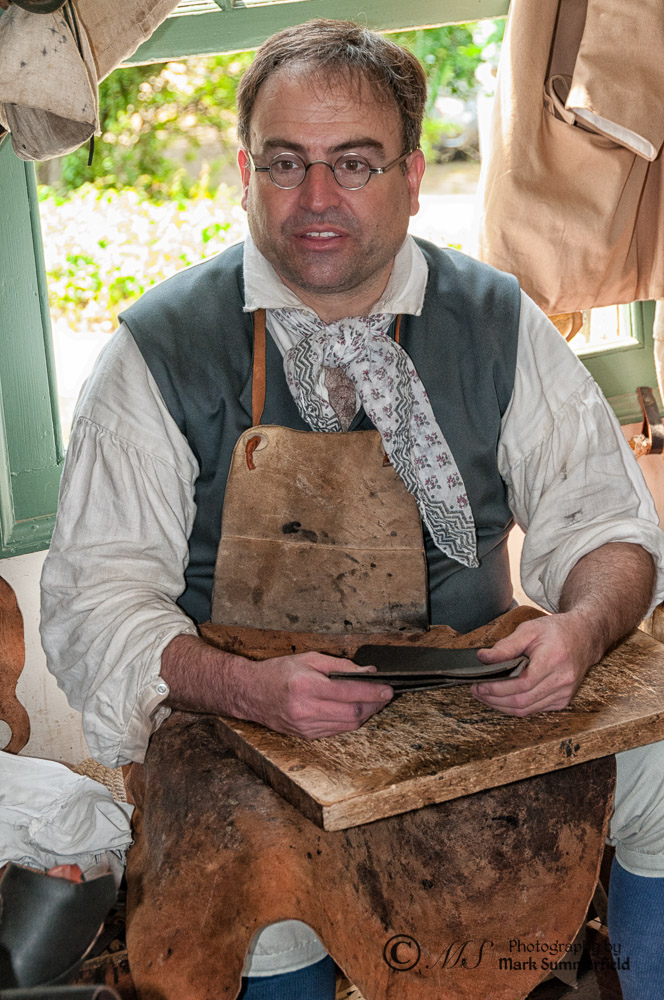