Happy New Year to all my visitors!

For the first post of the New Year I was going to highlight the big moments on the web-site for the year.  You know the drill:  increase in visitors over the previous year, most visited post, etc.  But then I thought, this might be of interest to me but why would this be something that my visitors would like to read about.  Then I realized that I had not published on this web-site any of the images taken on the Kelby Worldwide Photowalk I took part in back in October.

Richard Harrington who nows runs the Photofocus web-site led a small group of camera wielding people through part of the city of Falls Church in Virginia.  I have a reasonable knowledge of Falls Church as it is only a few miles from where I live.  There are some historic churches and antebellum houses all of which would make interesting photographic subjects.  Richard, I am glad to say, took us in a completely different direction!  First stop was Quinn’s Auction House, the largest auction house in Fairfax County.  Hidden within a small industrial estate, even closed it offered a wonderful selection of subjects to point the cameras at.

These two images are of three statues of Buddha which as you can see from the awning over the entrance to the auction house in the background of the first shot, are over 10-feet tall.  I found a post on Quinn’s Facebook page saying that they arrived in April.  It also said that they would be shortly up for auction.  I do not know if the sale was delayed or they missed their reserve price but I am sure glad they were still there in early October.  Obviously, these three statues were worth a sizable amount as they were actually padlocked to the wall.  I had to remove the padlocks and restraints in Photoshop. For the second shot I decided to try to highlight some of the wonderful craftsmanship in these statues. This is in fact the hand of the statue on the left in the first image and the head of the middle one.  I decided to play with some of the textures and other effects in OnOne Perfect Effects to come up with something representative of the age of these Buddhas. 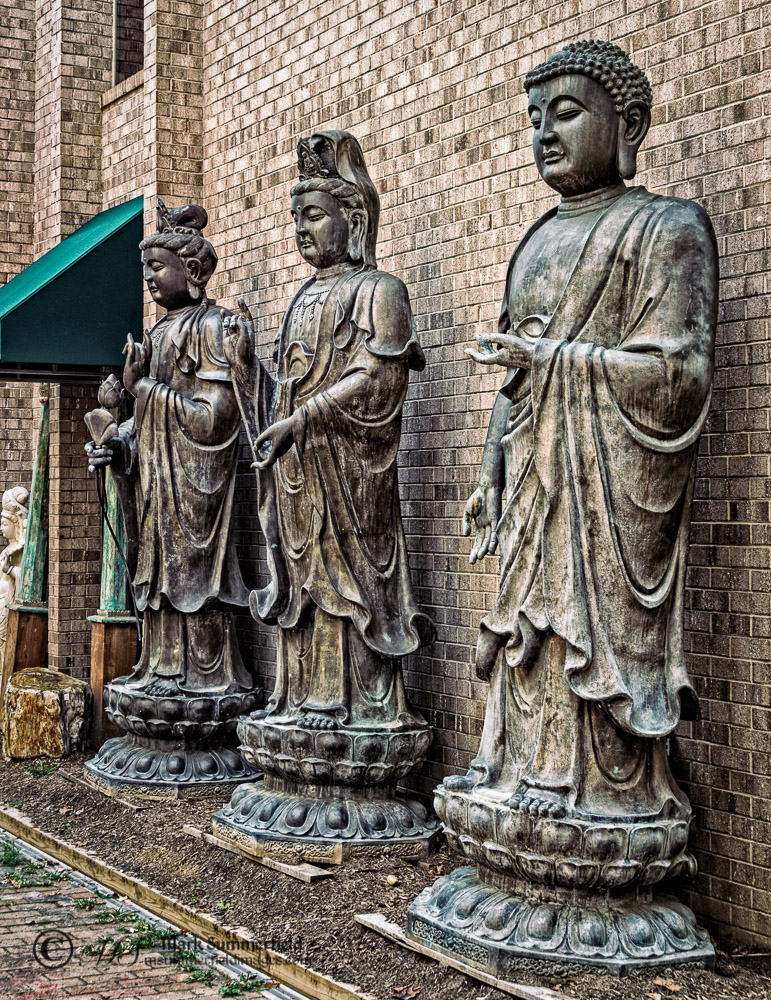