Today we return to the B&O Railroad Museum in Baltimore to take a look at the GP-9 diesel-electric locomotive.

General Motor’s Electro-Motive Division (EMD) released the GP-9 in January 1954 as an upgrade to the highly successful GP-7.  A total of 4,112 EMD GP-9 units were manufactured.  US production only lasted until December 1959 although the General Motors Diesel division in Canada made another 13 units over the next four years with production there finally ending in August 1963.

The release of the GP-7 signaled the end of steam on US railroads.  This locomotive proved to be an immense success, eclipsing EMD’s main rivals, Baldwin and Alco.  Introduced in 1949, the GP-7 had a 1,500 horsepower rating which made it capable of handling almost any type of freight.  The design also made it attractive enough to be used on passenger service.

The GP-9 followed the same styling as its predecessor.  It had, though, an uprated power rating of 1,750 hp.  These locomotives were reliable and easy to maintain making them a favorite with the operators.  Like the GP-7, the GP-9 was used on all types of railroads, both large and small.

The unit in the image above, Baltimore & Ohio No. 6607, was originally purchased in October 1956 and given the running number of 3414.  The locomotive was originally put into service on passenger duty between Cincinnati and Detroit.  In 1958, No 3414 was reassigned for freight service although it maintained its steam generator for emergency passenger service.   At this time it was renumbered as No. 6607.  It was retired from service in July 1986.  The unit was donated to the Baltimore & Ohio Railroad Museum in Baltimore in 1994.  After renovation, the B&O passenger color scheme of blue, grey, black, and gold was applied.

The day I visited the museum, there was not a cloud in sight. Capturing reasonable images became a little challenging due to the contrast. Thankfully, my Nikon D610 has a nice wide dynamic range which, together with the use of plug-ins from On-One Software and others has enabled me to create something worthwhile. What you see is not an HDR image but comes from a single RAW file. 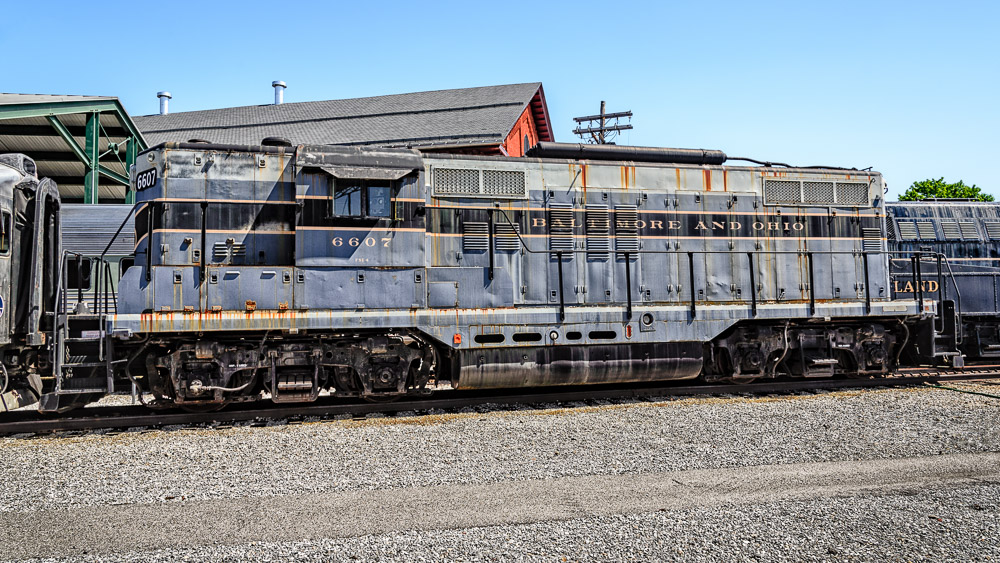