Back outside to the grounds of the old Mount Clare Station at the B&O Railroad Museum where we found the pair of EMD F7s.  Here we find a General Motors Electro-Motive Division (EMD) built SD-35.  These six-axle diesel-electric locomotives were built between June 1964 and January 1966. The long hood was not significantly different from earlier models but the cab, which EMD referred to as the “Spartan” became an industry classic with a low, short nose and front windshield.

EMD sold 360 of these units of which 24 were purchased by the Baltimore & Ohio Railroad for use on its West Virginia coal drag service. From my research, this is the only SD-35 that has been preserved, although, looking at the condition of Number 7402, preserved may be too strong a term – saved from the cutting torch may be more appropriate.

Like Clinchfield No 1 which we saw in an earlier post, I expect that there are thousands of images of this particular engine. I decided my image needed a different approach.  Something not usually associated with a 360,000 lb rusting diesel locomotive.   Starting in Topaz Simplify 4 I created two separate layers in Photoshop  – first the watercolor painting effect and, secondly, the sketch outline of a pen and ink drawing.  These were then blended together to create the basic look of the ink and watercolor painting.  Further finishing in the Perfect effects plug-in by On-One Software produced the final image seen here. 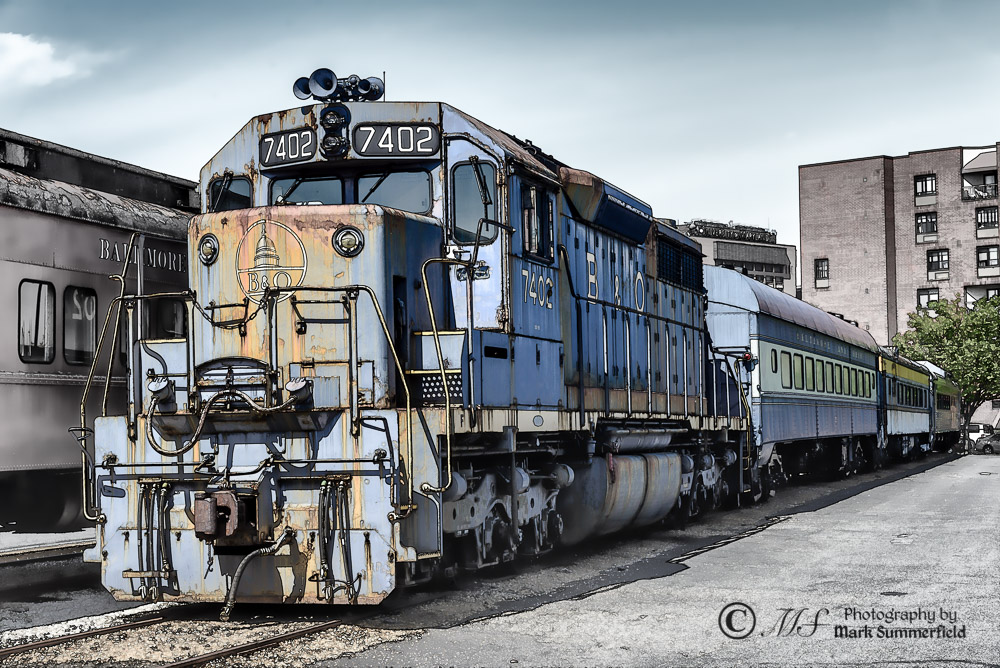