Los Cerrillos, New Mexico is officially a Ghost Town although there are still people living here.  In fact, according to the the 2000 census there were 229 people living in Cerrillos, as the town is referred to by the local residents.

It is not known exactly when Cerrillos had its beginning. What is known is that it is very old and probably dates as far back as 500 A.D. when Basket Maker Indians, one of the Pueblo Indians, were in their prime. The Pueblo Indians had for centuries before the Europeans obtained turquoise and galena from the Cerrillos Hills, the turquoise for its ritual use and for its medicinal power, and the galena (lead sulfide) for paint with which to decorate pottery. It was the Europeans, beginning with Capitan Chamuscado in 1581 and Antonio de Espejo in 1583 who first detected silver in the galena ore in the little hills. The silver was not abundant but it was definitely present, and the silver in a small way made up for the failure to find gold in New Mexico.

In 1879, nearly fourteen hundred years after the Pueblo Indians were first believed to have mined in the area, two prospectors from Leadville, Colorado began prospecting in the hills around Cerrillos rediscovering the ancient Indian diggings. Word spread fast of the reputed treasures and soon many “Colorado” miners swarmed the hills of Cerrillos. The following year the Atchison, Topeka & Santa Fe railroad arrived. The new train station on the south side of the now booming Cerrillos Hills became the center of activity. Cerrillos Station was well known and many people came from around the world to discover or buy a share in a mine and make their fortune. The new town started off as a tent city but soon grew into a town of many buildings, homes, a church, a school and stores.

By 1900 the galena and silver production had diminished, with only one smelter remaining. employing perhaps twenty intermittent workers. A decade later that smelter was shut down. The railroad was good for no more than a dozen jobs, even fewer as the years went by. The once-thriving town of Cerrillos morphed itself into a suburb of Madrid, the now thriving company coal town a few miles south. In 1903, thirteen years after it incorporated in the heady optimism of the time, Cerrillos Town disincorporated.

Over the next few posts we will take a look at some of the buildings and other sites which make Cerrillos such an interesting place to visit.  We start our tour, appropriately, on First Street at the Delallo-Simoni Building.

The J. H. Gerdes’ tailor & dry goods store was here, possibly as early as the mid 1880s, and certainly during the 1890s. This structure can be seen on the 1893 Sanborn map.  For the first three decades of the 20th century the green painted single-story building on the left was Tom DeLallo’s building, first as a saloon, but by 1909 as the Cerrillos Mercantile Company, which grew to have branches in San Pedro (south of Golden) and Waldo (west of Cerrillos). Around 1930 Mike Leyba acquired this building, and in 1934 he sold it to Tony Simoni, who also owned the larger building next door. Businesses here have included the Monte Carlo Bar and Mitchell’s Antiques (1954-57). In the late 1970s it housed the reborn town newspaper, the Cerrillos Rustler. In 2010 the building received a major overhaul. 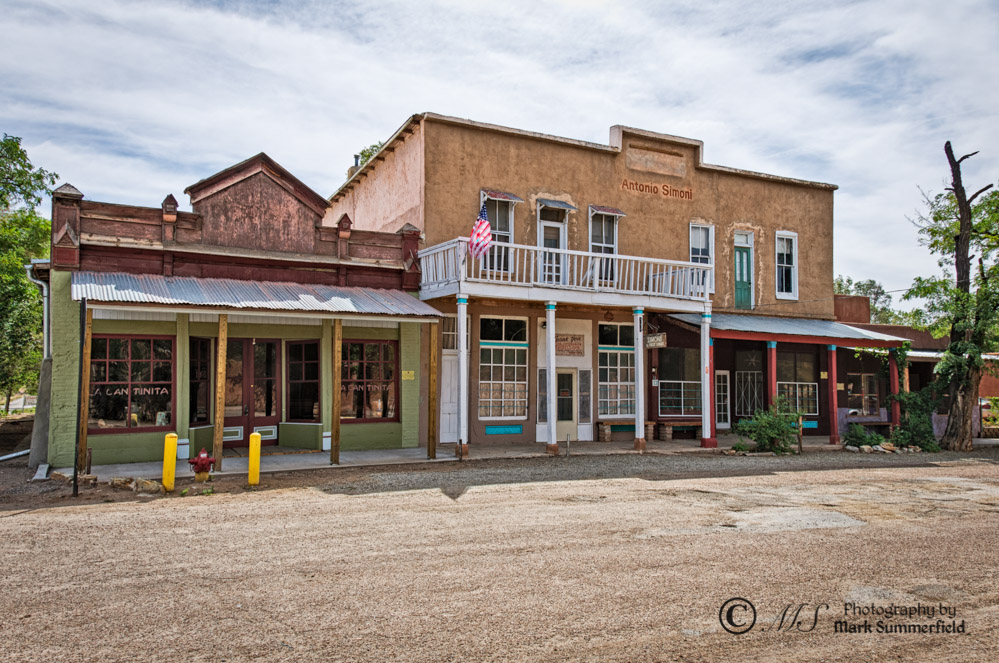