The first permanent settlement west of the Allegheny Mountains was establish in 1769. There had been earlier attempts at settling the area but all were destroyed by the Native Inhabitants. Being that most of these early settlers were from Virginia and, according to Dr. John McElhenney (historian and minister of the Old Stone Presbyterian Church for over 60 years), “generally inclined to Presbyterianism”, the early missionaries to visit the area were from this particular branch of the christian faith. In 1783, the Rev. John McCue arrived in the Greenbrier Valley and established three Presbyterian congregations – Spring Creek at Renick, Good Hope at Union, and the Camp Union Church at Lewisburg. These were the first Presbyterian churches “west of the mountains” and became the mother churches for the Presbyterian denomination in what eventually became central and southern West Virginia.

The first church – Camp Union – built in 1783 was a log structure situated about one mile west of Lewisburg. This lasted until 1794 when it was destroyed by fire. The second pastor, Benjamin Grigsby, provided the leadership for the construction of the replacement which was to be  stone structure. The building was made possible largely due to the generosity of Col. John Stuart who is known as the “Father of Greenbrier County”. John Stuart and his wife Agatha donated the land on which the church now sits as well as making a large donation to the construction fund.

At the time the congregation consisted of only twenty people. This meant that the women had to help in building the church as well as the men. Tradition says that the sand for the construction came from the Greenbrier River and was carried on horseback by devoted women of the congregation. Architecturally simple with no adornments after the meeting house style common in the late 18th century, the limestone sanctuary was completed in 1796. This is the structure in which the Church still worships today.

The Old Stone Presbyterian Church is the oldest church building in continuous use west of the Alleghenies (I guess the historians in West Virginia do not count the churches in New Mexico). The original building was about 40 by 40 feet square. The entrance faced the east and Market Street. The pulpit was at the west end. In 1830 the church was extended by about 25 feet to the east end. The pulpit was moved to the south wall and a window covered over to accommodate the move. The gallery was also extended across the west wall. The bell tower was added in 1834. 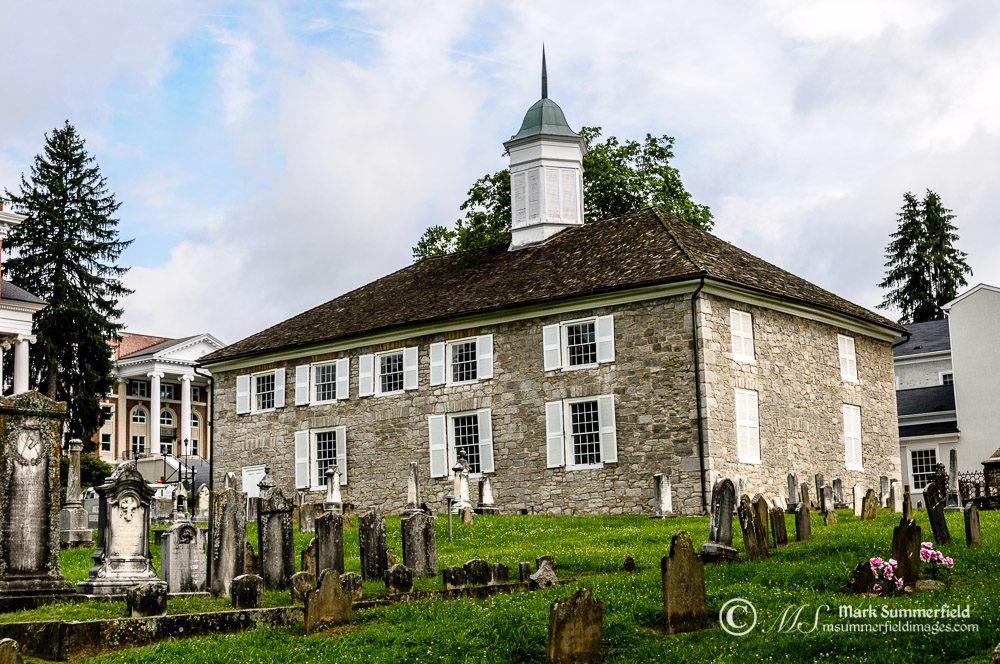