In last week’s post we looked at the Shrine of Our Lady of Lourdes in Ohkay Owingeh Pueblo.  Here we turn round 180 degrees to see the Statue of Our Lady of Lourdes which brought about the shrine. This 8-foot tall bronze statue still sits atop the pedestal outside San Juan Bautista Parish Church (St. John the Baptist) where Fr. Camilo Seux had it placed in 1888.

As noted in the last post, the Spanish under the command of The Spanish conquistador, Don Juan de Oñate y Salazar arrived at the pueblo in 1598.  They immediately began building a church at San Gabriel on the outskirts of the pueblo.  Dedicated to San Miguel (St. Michael archangel), it only took 15 days to complete with the first Mass celebrated on September 8, 1598. It was large enough to accommodate all the people, but because it was built in such a short period of time, it was probably built from unfinished wood and given a mud plaster.  A second church, which replaced the first was also built at San Gabriel.  Nothing remains of the first church but the foundations of the second were discovered in 1959.

In 1610, Oñate’s replacement, Governor Don Pedro de Peralta, moved the capital to Santa Fe. San Juan, though, remained as a flourishing mission. The Franciscans built a new rectory here sometime between 1640-1660.  The church of San Miguel was most likely still used until the next church was built in 1643 about a mile away, near the site of the present church. This church was dedicated to San Juan Bautista. It was destroyed in the Pueblo Revolt of 1680.

After the Pueblo Revolt, San Juan was re-established as a mission and the fourth church was then built in 1706 but this time in the present-day main pueblo, on the same site where the present church is located.  It was narrow: 22 feet wide and 110 feet long.  It had an outside balcony and an arched bell gable in the front with two bells.  The bells were not rung but were hit with stones.  Inside the main church, there was a choir loft with its entry from the roof of the rectory; in front, there was an altar screen that went from floor to ceiling, paid for by the governor, painted yellow, blue and red (Spanish royal colors).

Although there is much more history leading up to New Mexico becoming a  U.S. Territory, not much of a record exists for that time period. The next major event in the recorded history of the parish occurred when Rev. Jean Baptiste Lamy, a parish priest serving in the state of Ohio, was made first bishop of Santa Fe in 1851.  Shortly after he arrived, he returned to his native France to recruit priests for his new diocese.  Among the priests he brought was a seminarian, Fr. Camilo Seux, who arrived from Lyon, France in the spring of 1865. Archbishop Lamy ordained him shortly thereafter.  He first served as an associate pastor in Taos, Santa Fe, Albuquerque and Pecos before he was made pastor in San Juan in 1868 and served at San Juan for 56 years!

In 1912, unappreciative of the historical significance of the old adobe church, Fr. Seux, with the blessing of the bishop, ordered its destruction (by way of dynamite). The current French neo-gothic style church was completed in 1913. 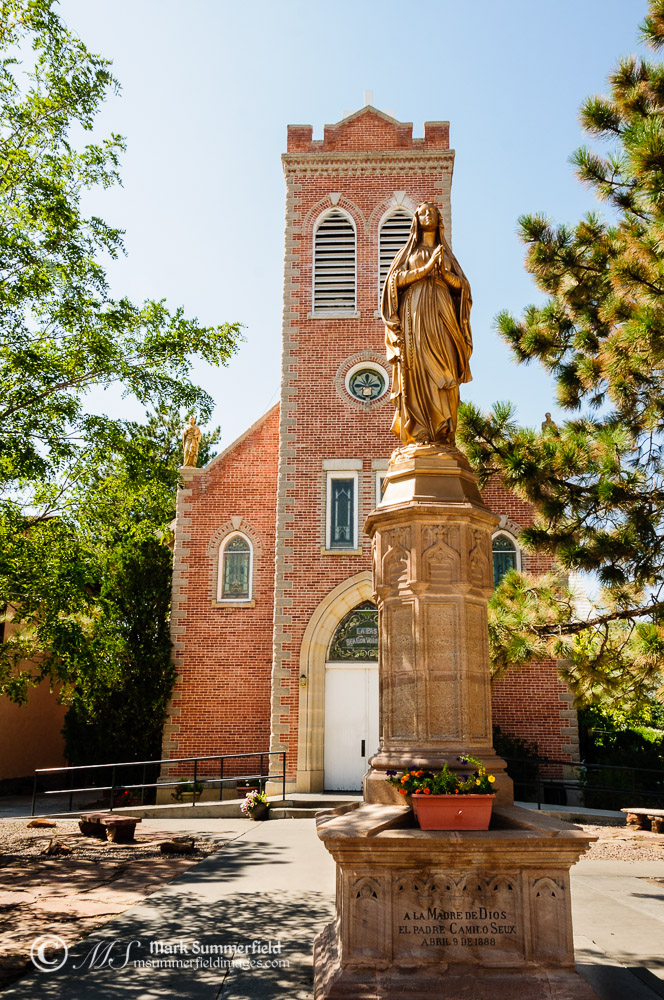