The San Lorenzo de Picuris Mission Church has a long and storied history.  There was a rudimentary mission at the Picuris Pueblo in Taos County, New Mexico since sometime between 1581 and 1620 when Fray Francisco de Zamora was charged with the establishment of a permanent mission at Picuris.  Under his custody a chapel dedicated to San Lorenzo (Saint Lawrence) was erected.  By 1620 the church was under the charge of Martín de Arvide, and by the later part of the decade the religious enterprise was a going concern, serving several surrounding villages in addition to Picuris itself.

The mission had undergone may restorations and rebuilds mainly due to abandonment as the inhabitants of the pueblo had left.  By the end of the 1750s Governor Antonio Marín del Valle had discovered the pueblo in ruins. The Comanche completed what nature had begun, conclusively destroying the mission in 1769.  The new church was already under construction when Fray Francisco Ananasio Dominguez arrived in 1776.

The following has been extracted from the University of California Press e-book “Sanctuaries of Spanish New Mexico”:

The story of the new church’s construction is of interest because it illustrates the presence of Hispanic building skill even in the building of churches in Indian pueblos. This may have been the principal vehicle for the introduction of the Spanish architectural tradition into that of the Indian, with the civilian builder serving as a sort of technical intermediary between the stylistic ideas of the padres and the common construction competence of the Indians. A civil contract to construct the church was enacted between Fray Sebastián Ángel Fernández of Santa Cruz and Alcalde Salvador García de Noriega. It was to be a complete package, what today would be termed a turnkey project, including “transepts, door, two windows to the east, choir loft, corbels and round beams, plus a three-room dwelling, a sort of token convento.” The payment was to be in goods, and the amount of goods that the good friar had at his disposal seemed to wrinkle the eyebrow of Domínguez, who perhaps believed that there should be less commercial dealing and more converting. The renumeration was to be “12 cows, 12 yearling calves, 25 ewes with a stud ram, a fine she-mule, 100 fanegas of maize and wheat,” and for his sweet tooth “100 pounds of chocolate.”

In the 1980s the building was found to be in serious danger of collapsing. Cement plaster had been applied over the church’s exterior decades earlier, but water had seeped under the cement and eroded the adobe within. Conservators found that the old structure could not be saved and so it was torn down.  A new church using the original design as well traditional construction methods was built on the old foundation.  The work was undertaken by tribal members and non-Indian volunteers.  Funding for the project was provided by the New Mexico Community Foundation.  The new church was dedicated in 1993.

Behind the alter is a wooden rededos.  Occupying the full width of the chancel, this panel is filled with paintings done in various styles and degrees of excellence.  Most are painted directly onto the wood and are reputed to be “very ancient”.  The upper row consists of a painting of Our Lady of Guadalupe in the center, flanked by an archangel and a saint on either side, San Rafael and San Antonio being on the right and San Miguel and San Juan Nepomuseno on the left. The dragon of San Miguel and the fish of Rafael are made very conspicuous. Below these and immediately over the altar are three pictures occupying the same width as the five above. The central one is a large modern canvas representing San Lorenzo, in scarlet and gold vestments over a white surplice, carrying an enormous gridiron with a long handle. On the sides are paintings of San Francisco and San Antonio de Padua.

There is a photograph of this rededos in the University of California Press e-book dated 1935 proving at least that it was removed from the church and stored during the building of the current structure. 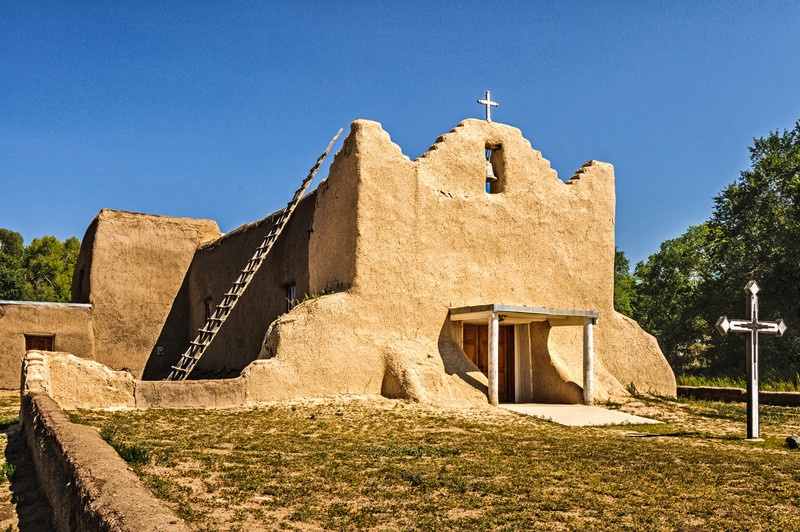