Home » Blog » Shrine of Our Lady of Lourdes

Shrine of Our Lady of Lourdes Shrine of Our Lady of Lourdes

The Shrine of Our Lady of Lourdes is in Ohkay Owingeh Pueblo, about 25 miles north of Santa Fe, New Mexico.  The Pueblo was founded around 1200 by the Tewa people.  The Spanish arrived in 1598 making this the first Spanish settlement in New Mexico.  The Spanish conquistador, Don Juan de Oñate y Salazar renamed the pueblo San Juan de los Caballeros after his patron saint, John the Baptist.

San Juan Pueblo returned to its pre-Spanish name of Ohkay Owingeh in November 2005 but the parish retained in Spanish name. The parish church, San Juan Bautista (St. John the Baptist), is located on a square in the centre of the town.  50 yards across the square is a beautiful  gothic chapel which you would assume is the original parish church.   After all it is obviously older and smaller than the church it faces.  However, this example of French Gothic architecture is the Shrine of Our Lady of Lourdes.

It was conceived as a place of pilgrimage for those faithful wishing to honor Our Lady and to be given a glimpse of her place of apparition to St. Bernadette Soubirou in the Pyrenees Mountains of Southern France.  In 1888, 16 years after Lourdes was declared an official Marian apparition, Fr. Camilo Seux, a Frenchman who at this time was the pastor of San Juan, sent for an eight-foot bronze statue of Our Lady of Lourdes.  He placed the statue on a ten foot stone pedestal in front of the church. The story is told that so many pilgrims came to see the statue and so many knelt on the steps of the pedestal that Fr. Seux decided to build a shrine for them across from Mary’s statue.

The Shrine contains a replica of the grotto where Mary appeared to St. Bernadette in the Pyrenees Mountains of southern France in 1858. The architect of the Shrine was another freshman, Antoine Mouly, who also designed the Cathedral  Basilica of Saint Francis of Assisi as well as the Loretto Chapel in Santa Fe.  It is also only one of 19 buildings in the country built entirely out of lava rock.  Construction on the Shrine began in 1889 and was completed for dedication on June 20, 1890.

It is remarkable that from its dedication in 1890 to the present very few changes have occurred to the Shrine.  For example, it has never been wired for electricity or had natural gas lines installed.  In restoring the Shrine in 2004, it was  discovered that the walls were only painted twice in 115 years!  The only noticeable change was the addition in the 1960s of cement around the exterior of the Shrine for structural maintenance. 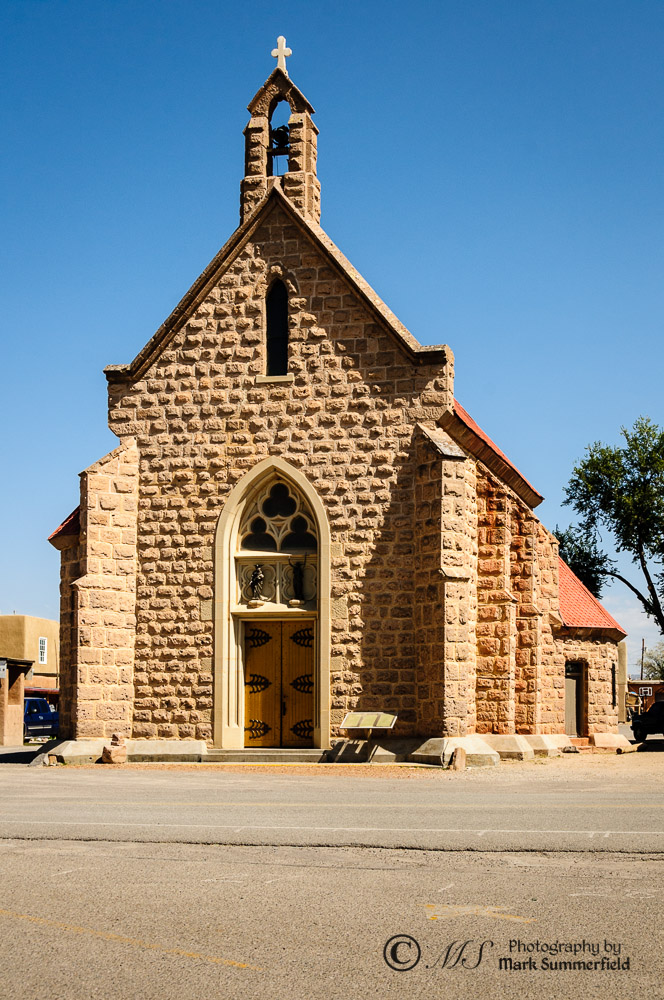