The Sherrick Farm is located within the Antietam National Battlefield. It is owned by the National Park Service and like many of the buildings on the battlefield not open to the public.

It is at the southern end of the battlefield near Burnside Bridge. Owned by 60-year old Joseph and 55-year old Sarah Sherrick, it was a prosperous farm until September 17, 1862.  The farm ended up being between the two opposing forces. The Sherrick’s left in a hurry.  According to Kevin M Walker and K.C. Kirkman, in their book Antietam Farmsteads: A Guide to the Battlefield Landscapes, a 22nd Massachusetts soldier reported:

“Upon visiting the Sherrick’s house that morning, we found it quite a sumptuous affair.  It had been hastily evacuated, as it was between the lines. The foragers ahead of us had pulled out what edibles it contained, and among them a splendid assortment of jellies, preserves, etc., the pride of every Maryland woman’s heart, but now scattered about. The orchard was filled with the choicest fruit. What a feast! Our stomachs, just beginning to become accustomed to ‘salt horse’ and ‘hard tack,’ earnestly opened and yearned for this line of good things.”

Soldiers from both armies swept over the farm during the latter stages of the battle.  Once the fighting had ceased, the Sherrick house and barn, as well as the house of their neighbor John Otto, were used as field hospitals.  The orchard and most of the crops were destroyed during the battle and its aftermath.  Fortunately, the $3,000 in gold that Joseph Sherrick had hidden in a stone wall on the property was still there when he returned.

The main farmhouse seen here dates to about 1830. The house has two cellars, the south walls of which are exposed. The whitewashed stone together with the ground floor veranda give the impression of a three story building as seen in the image above. One of the strangest features of the building is the roof. At the southern end is hip roof, punctuated by two reasonably low-rise chimneys. At the north end, though, the roof finishes with with a gable end. The single chimney at the north end extends way beyond the roof ridge line.

Not only is the Sherrick Farmhouse larger than most on the battlefield, its interior is more elaborate. One of the fireplaces is marbleized. There are chair rails in most of the rooms and the main stairs are ornamented with a wave molding. There is some evidence, reported in the Antietam National Battlefield Nomination form for the National Register of Historic Places, that all of the interior rooms still have their original paint. Although the house has been wired for electricity, no modern plumbing has been added. 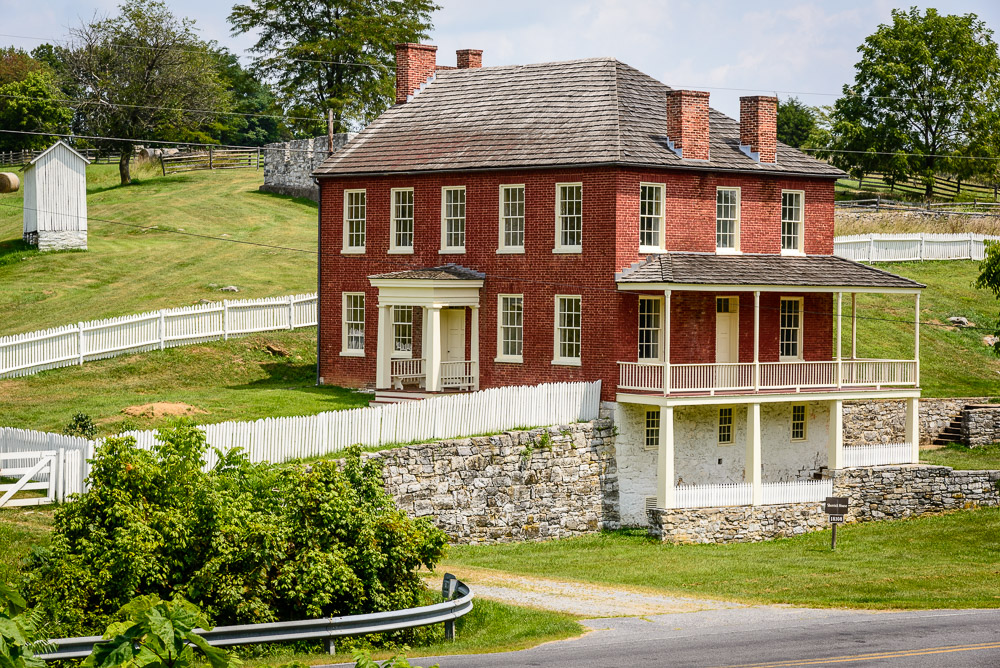