Whites Ferry is the only active ferry of the scores that once plied the waters of the Potomac River.  It was first known as “Conrad’s Ferry” after Ernest Conrad who started poling a ferry across the river at this point around 1817.  Elijah White, a successful business man in the area and former Confederate colonel, purchased the business from the Conrad family after the Civil war, restoring the ferry service in 1871.

Elijah White was born in nearby Poolesville, Maryland but started his business career when he purchased farmland on the Virginia side of the Potomac.  His knowledge of the area on both sides of the river proved him to be of great worth to a number of the Confederate generals.  During the Civil War he served under Stonewall Jackson, Robert E. Lee, J.E.B Stuart and Jubal Early.  He also commanded his own battalion known as “the Comanches”, which were based in Loudoun County for most of the war.

After the war was over, Whites business successes grew, founding a “country store” in Leesburg in 1865.  Over the years he acquired or built warehouses along the C&O canal at Sycamore Landing, Edwards Landing as well as what was to become known as Whites Ferry.  He also served as a pastor to several Baptist congregations in Loudoun County.  It is this last fact that makes one wonder why Elijah White named his ferryboat after Jubal Early, a man notorious for hard drinking and, what today would be called, a very colorful vocabulary, and not one of the other famous generals he served under.

I believe it was his farming background and the development of the C&O canal as a viable means of transporting goods to Washington that lead Elijah White to purchase the ferry business.  The roads in Virginia were quite unsuitable to the movement of produce from the farms to market, in-fact becoming quite impassable in bad weather.  In the days before modern refrigeration, a farmer’s access to reliable transportation meant the difference between prosperity and watching a year’s worth of work rot in storage. By using the ferry, the farmers were able to move their produce across the Potomac to be loaded onto barges on the nearby C&O canal for transportation to Washington.

The modern ferry, still retaining the name given to his original boat by Elijah White, can transport between 20 and 24 cars across the Potomac River in about 5 minutes with a couple of minutes to load and unload.  With the limited river crossings, Whites Ferry remains a popular means of crossing the Potomac River between Virginia and Maryland.  The ferry operates every day excepting when severe weather in the form of ice or flooding makes the crossing unsafe.

The Gen. Jubal A. Early is a cable ferry.  A cable ferry is guided and in many cases propelled across a river or other larger body of water by cables connected to both shores. They are also called chain ferries, floating bridges, or punts.  Below we see one of the earlier manually operated cable mechanisms which moved the ferry from one shore to the other. 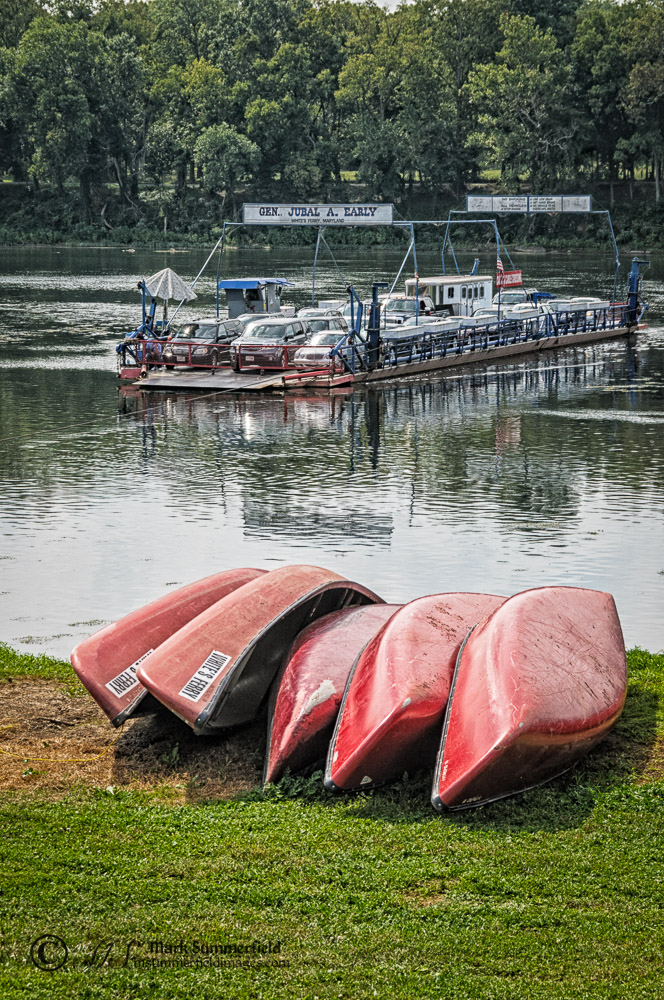