During the summer we visited the Chesapeake Bay Maritime Museum. As luck would have it, the day we visited the local chapter of The Antique & Classic Boat Society were holding their annual boat festival at the museum. We have already taken a look at a couple of the permanent exhibits at the museum in earlier posts. Today we will see one of the beautifully restored boats from the Classic Boat show: a 1946 wooden runabout.

A runabout is a small motorboat designed to hold between four and eight people. The first runabouts date back to the 1920s and were designed to take advantage of the recently introduced outboard motors. The hull was shaped so that the boat could skip atop the water’s surface at high speed by hydroplaning. An early development in the runabout’s design was to introduce a string wheel instead of the traditional tiller and rudder controls.

The first runabouts were constructed of varnished wood. After Word War II the use of aluminum became standard and even later, fiber reinforced plastics.

One of the early builders of the wooden runabouts was Chris-Craft. Based in Sarasota, Florida, Chris-Craft Boats became famous for its mahogany hulled powerboats of the 1920s through the 1950s. During this time, a Chris-Craft mahogany boat was considered to be among the best available. They were easy to operate and maintain.

Here we see an example of one such boat, a 22-foot long Sportsman model, “Stars & Stripes.” This runabout, built in 1946, still has a lot of its original African mahogany. The restoration also includes the original engine, steering wheel and dash, and the wooden parts of the seats. 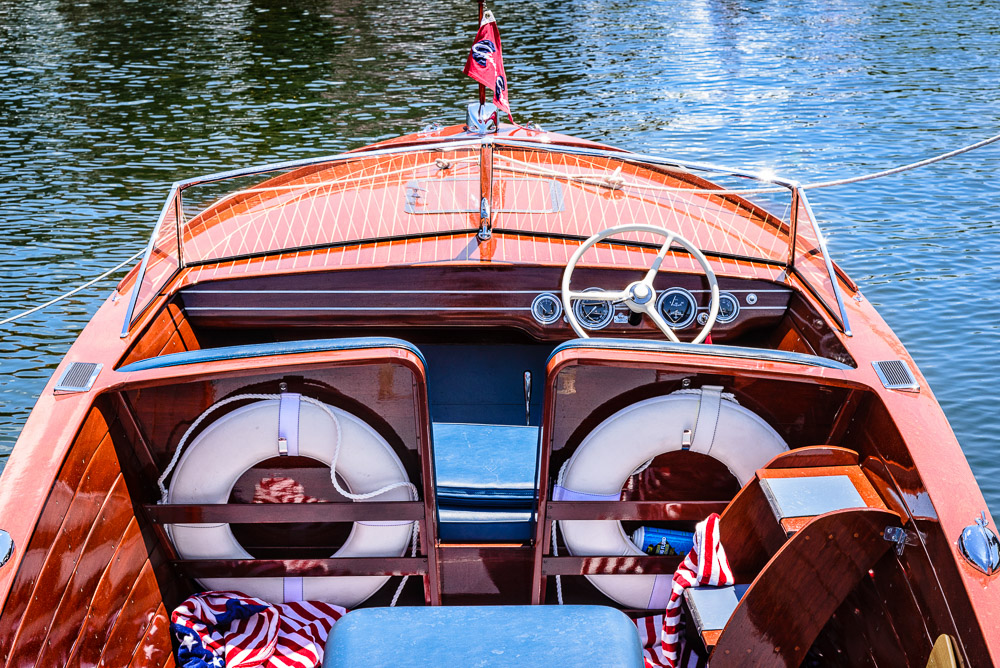