Having finished admiring the beautiful roof of the roundhouse at the B&O Railroad Museum in Baltimore, I turned my attention to the exhibits themselves.  The first locomotive we look at is the Clinchfield No. 1.  Built in 1882, this 4-6-0 has had a storied history.  It was built in Logansport, Indiana by the Columbus, Chicago & Indiana Central Railroad and given the number 423.  It was originally built as a freight locomotive but as we will see it was on passenger excursions that the engine caught peoples’ attention.

The engine passed through many different owners, mainly as a result of the consolidation of the railroads.  Within a year of its construction the locomotive fell under the ownership of the Chicago, St. Louis and Pittsburgh Railroad.  It was also owned by Pittsburgh, Cincinnati, Chicago & St. Louis Railway, the Ohio River & Charleston Railroad and the South & Western Railway.  It passed to the Black Mountain Railway in 1913 where it acquired its now famous No. 1.  The Black Mountain Railway was taken over by the Carolina, Clinchfield & Ohio Railroad in 1915.

The Clinchfield Railroad’s revenue came mainly from transporting timber.  However, by 1928 most of the timer in the area had been harvested.  The  loss of revenue was such that one of the lines operated by the railroad was removed.  This though did not stop the decline.  In 1951 the Clinchfield applied for abandonment with the Interstate Commerce Commission.  Permission was granted with one stipulation – if local interests wished to acquire and operate the line, the Clinchfield Railroad was obligated to sell it at a fair price.

Local interest did step forward.  The line was purchase for $22,000.  Old No. 1, as the engine is affectionately known, continued operating until 1955.  This though, was not the end of the line for No. 1.  The locomotive was sold to the city of Erwin, Tennessee where the Clinchfield had been headquartered.  The city put the engine of permanent display under a protective shed.

In 1968, Old No. 1 was sold back to the railroad for only $1.  The engine was fully restored to its former glory and on November 23, 1968 began a decade-long career as the lead on the popular Clinchfield Special excursions.  In 1976, Sen. Howard Baker brought back the old-time whistle-stop campaign through Tennessee behind Old No. 1.  This proved to be somewhat unsuccessful for the senator as the engine was much more popular than he was, leaving him to make speeches to just a handful of dignitaries whilst everyone else admired the locomotive.

In June 1979, Clinchfield No .1’s days in the sun pulling excursion trains was over and it was moved to its present location at the B&O Museum in Baltimore.  That may not be the end of the story.  The town of Erwin has written a letter to the museum inquiring about its possible return.  This I doubt will happen.  The engine has a prominent place in the collection which would be very hard for the museum to replace.

There is much more to learn about Clinchfield No.1 which can be found here.

As with all photographs taken in museums, thousands of people have taken the same shot.  In this series of images from the Baltimore & Ohio Museum I have decided to try to create something a little different by applying Photoshop and the great plug-ins from On-One Software.  In this instance I have tried to make the image look as if it was created back in the heyday of Old No. 1. 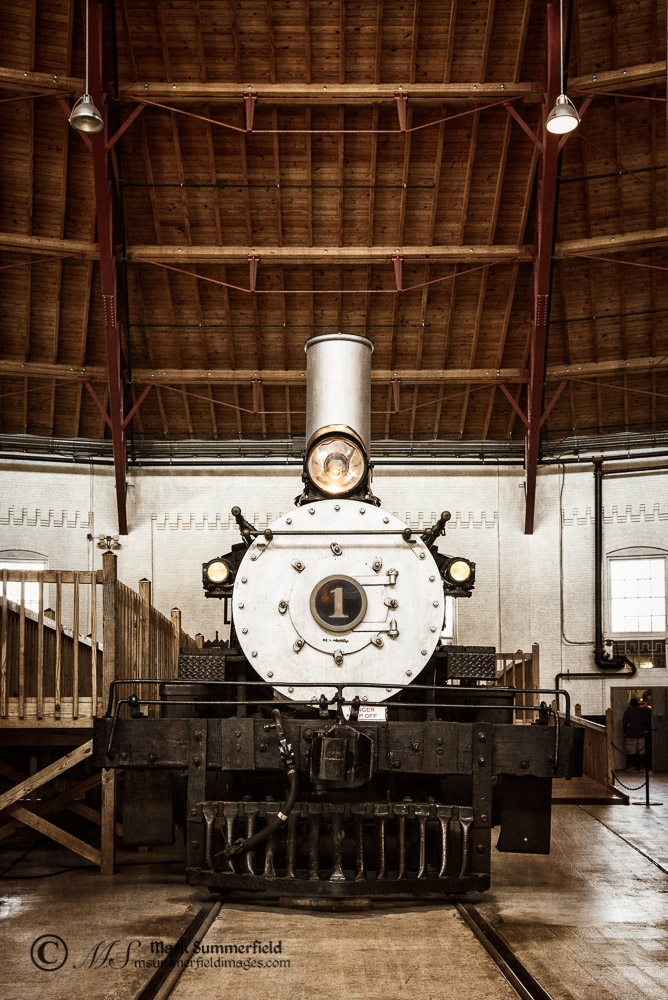