The Octagon House is located at the junction of 18th Street and New York Avenue, NW in the Foggy Bottom neighborhood of Washington, DC. Like the Wilkins House and the Patterson Mansion which we have visited in earlier posts, the property has been designed to deal with the unusual, non-rectangular blocks that result from the unique road pattern of Washington, DC.

The basic concept of the Octagon House design combines a circle, two rectangles and a triangle. The construction materials such as the bricks, timber, iron and Acquit Creek sandstone were all sourced locally. The Coade stone and other decorative elements as well as the stoves and furniture, though, were all imported from England.

After the British burned the White House on August 24, 1814, President James Madison moved into the Octagon House with his wife Dolly. It was in an upstairs study of the Octagon House that the President ratified the Treaty of Ghent on February 17, 1815, which brought the War of 1812 to an end. The Tayloes received $500 rent for the six month long occupancy by the Madisons. The house was originally intended to be the winter residence for the Tayloe family. However, after the departure of their Presidential tenants, the family moved in for good. They lived in the Octagon House year-round from 1815 to 1855. John Tayloe III died in the property in 1828. His wife, Ann Ogle Tayloe, continued to live in the house until her death in 1855.

After Ann’s death, the Tayloe children, one of whom, Benjamin Ogle Tayloe lived nearby on Lafayette Square, rented out the property. In 1860’s the occupants were a girls’ school. The federal government took over in the 1870s, when the Octagon Property became the offices of the Hydrographic Office of the U.S. Navy. In the 1880’s it became tenement-style apartments occupied by 10 different families for the workers in the nearby Foggy Bottom factories.

In 1898, the American Institute of Architects (AIA) chose the Octagon House to be their national headquarters. They rented the property for four years, purchasing it outright in 1902. The AIA moved into the modern office block behind the building in the 1960s. The Octagon became a museum in the 1970s. The museum is administered by the American Institute of Architects Foundation, and offers self-guided tours, permanent and changing exhibitions, public programming, and guided tours by appointment.

The Octagon House was declared a National Historic Landmark in 1960. 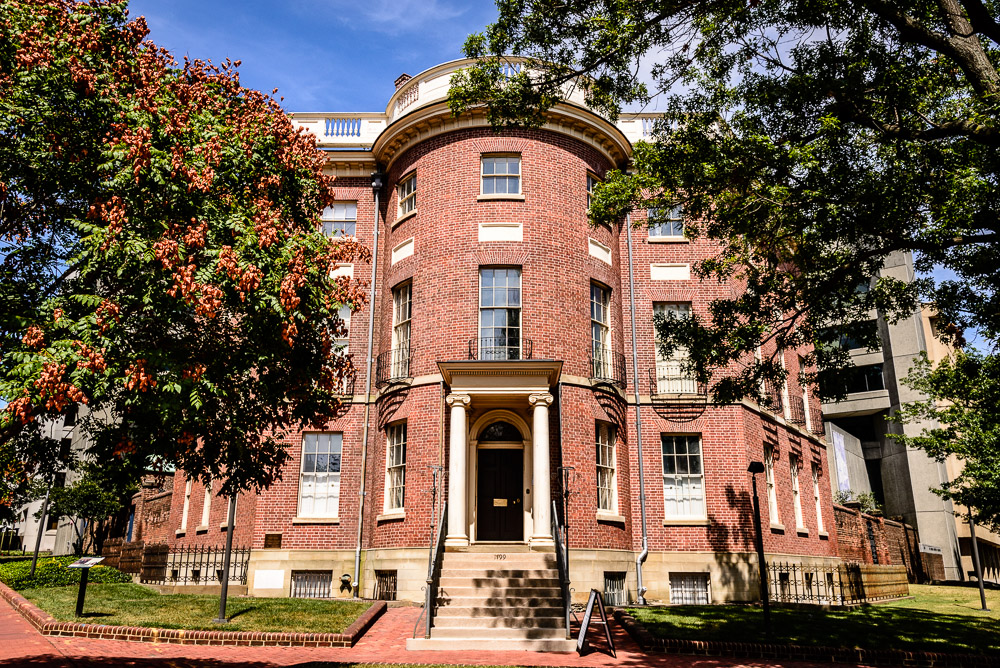