As the Department of the Interior expanded, its need for office space became problematic.  By the time Franklin D Roosevelt became President on March 4, 1933, its employees were scattered throughout the city in 15 satellite offices as well as the headquarters in the Patent Office Building.  As soon as Roosevelt’s administration took office, Secretary of the Interior, Harold Ickes, was given permission to find a suitable site and build a new building specifically for the Department.

At the time, Ickes had the responsibility for the Public Works Administration (PWA) as well as being Secretary of the Interior.  The PWA was part of Roosevelt’s New Deal.  Originally called the Federal Emergency Administration of Public Works, the PWA spent over $7 billion in contracts to private construction firms to revitalize the country’s infrastructure over an eight-year period.  The PWA was less controversial than the similarly named Works Progress Administration which focused on similar projects but hired unskilled labor directly.

Both departments were responsible for spawning a style of architecture which became one of the signatures of the public works of the era.  It was known as PWA Moderne or Stripped Classicism.  The style is drawn from the motifs of Beaux-Arts classicalism and Art Deco, which were very familiar in Washington DC at the time and used in many of the existing federal buildings.  The structures built in this style reflected a greater use of conservative and classical elements whilst having a monumental feel.

Ickes allotted $12.74 million from PWA funds for the construction of the new interior building.  Prominent Washington architect Waddy Butler Wood was hired for the project.  The design incorporated many of the features which became the norm for PWA Moderne buildings.  The building is simply decorated on the exterior producing a somewhat austere look.  The double hung windows are recessed from the fascia giving the appearance of square pillars.  The center five bays of the third through fifth stories are further recessed forming a loggia.

The overall shape of the building is perhaps its most unique feature at the time.  Now copied in many federal buildings of that era, the building has six wings running east to west with a connecting wing through the center running north to south.  The connecting wing provides the entrances to the building.  The southern entrance on C Street has the only adornment on the façade.  Between the loggia and the doors there are incised letters spelling DEPARTMENT OF THE INTERIOR.  There are also seals representing the thirteen original colonies above the windows of the seventh floor.

Whilst occupying the old headquarters, Ickes had air conditioning installed.  He insisted that central air conditioning be installed throughout the building, the first such system in a large government building.  Other significant aspects of the interior included wide central corridors, acoustically treated ceilings and fireproofing.  It provided the most modern and comfortable work environment for Federal employees in Washington.  Even with all these innovations, Ickes reported in a Cabinet Meeting that the building cost 10 to 15 percent less to operate than any other building in the Federal Triangle.

The Main Interior Building was renamed the Stewart Lee Udall Department of the Interior Building by an Act of Congress in 2010.  Stewart Udall served as Secretary of the Interior for eight years during which time he was responsible an expansion of federal public lands and assisted with the enactment of major environmental legislation.  He oversaw the addition of four national parks, six national monuments, eight national seashores and lakeshores, nine national recreation areas, twenty national historic sites, and fifty-six national wildlife refuges.

Reflecting its position as the first building authorized, designed, and built by the Roosevelt administration, the Main Interior Building, as it was known at the time, was listed on the National Register of Historic Places on November 10, 1986. 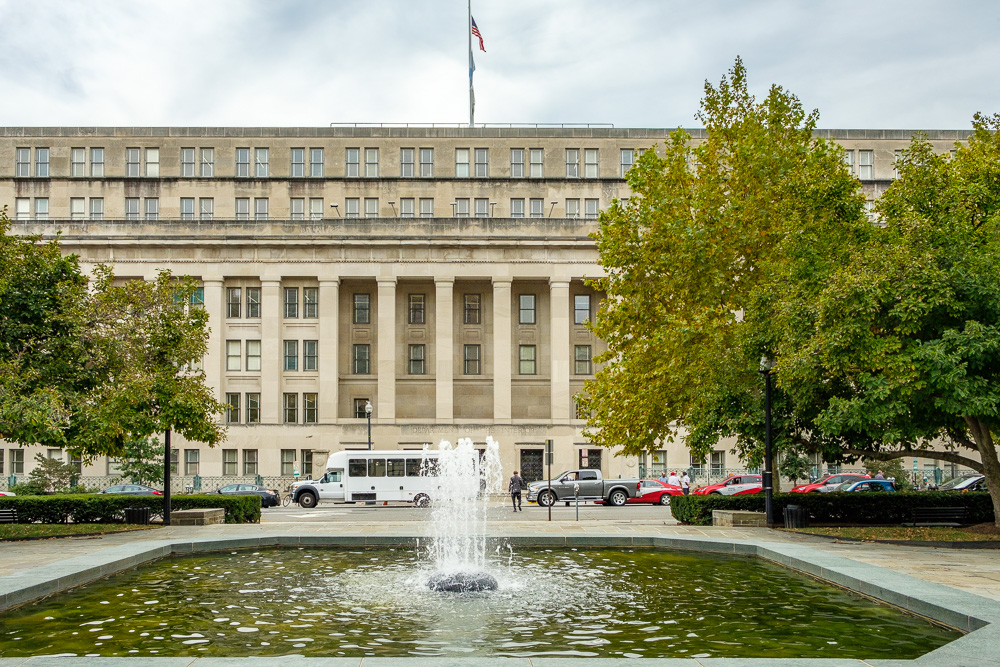