The Patterson Mansion (also known as the Patterson House) was completed in 1903. It occupies a prominent position on Dupont Circle in Washington, DC where Massachusetts Avenue joins the circle. The architect, Stanford White, had his own method of dealing with infamous non-rectangular blocks of land which are the result of Washington’s non-grid pattern of roads. He used outstretched arms either side of the central entranceway instead of the thrust back arms most other architects used. This also allowed for the small in-and-out circular driveway which can be seen at the front of the building.

This white marble renaissance style mansion was built for Robert Wilson Patterson, the editor of the Chicago Tribune newspaper. It was used for entertaining when any member of the Patterson family was in town. Robert Patterson died in 1910 but his wife, Nellie, kept a full complement of staff (about 10 to 15) until 1922. They were always dressed in full livery available for any visitors if they happened to drop by.

Nellie Patterson vacated the property for good in 1923. She deeded the property to her daughter, Eleanor Josephine Medill “Cissy” Patterson. Newspapers were in the Patterson blood as Cissy was the owner of the Washington Times-Herald. Although Cissy formally took up residence in the Patterson Mansion in 1923, she spent most of her time elsewhere. The house was barely occupied from 1923 to 1929.

One occupant during this period was President Calvin Coolidge and his wife Grace who lived in the Mansion in February 1927. The White House was in need of extensive restoration which rendered it uninhabitable while the work was undertaken.

Upon his triumphant return from his non-stop trans-Atlantic flight, Charles Lindbergh was a guest of the President whilst he occupied the Patterson Mansion. The house was besieged by crowds throughout his stay. Some of the iconic photographs of Charles Lindbergh are of his appearances for the crowd at the second floor balcony of the Patterson Mansion.

Cissy reoccupied the Mansion in July 1929. The Mansion became a prominent center of social life in Washington. Cissy died in July 1948. She had originally willed the property to her daughter, Felicia. Following a family argument in 1942 she changed her mind and decided to leave the building and most of the furnishings to the American Red Cross.

The Red Cross had no use for the property having built and occupied a suitable headquarters in the District of Columbia 30 years earlier. The Red Cross decided to sell the property instead. The auction, though, raised little interest at the asking price of $700,000.

The house stayed on the market until January 1951 when it was purchased by the Washington Club, a private women’s club, for $450,000. The Washington Club occupied the building ten months later. They rented out the bedrooms on the second and third floors to its club members.

It is understood that the Washington Club is disbanding and no longer needs the space. It put the Patterson Mansion up for sale in the summer of 2013. The asking price was $26 million. It was purchased by French Quarter Hospitality. The sale to French Quarter fell through in early December 2013 after the Historic Preservation Review Board denied approval for the six-story addition, saying it would destroy the historic character of the mansion. In February 2014, real estate developer SB-Urban agreed to buy the Patterson Mansion. From the planning notice posted on the in-out circular driveway I read, they plan on turning the property into luxury “micro-unit” apartments (units of 400 square feet or smaller). The building’s ballrooms and other spaces would become common areas. 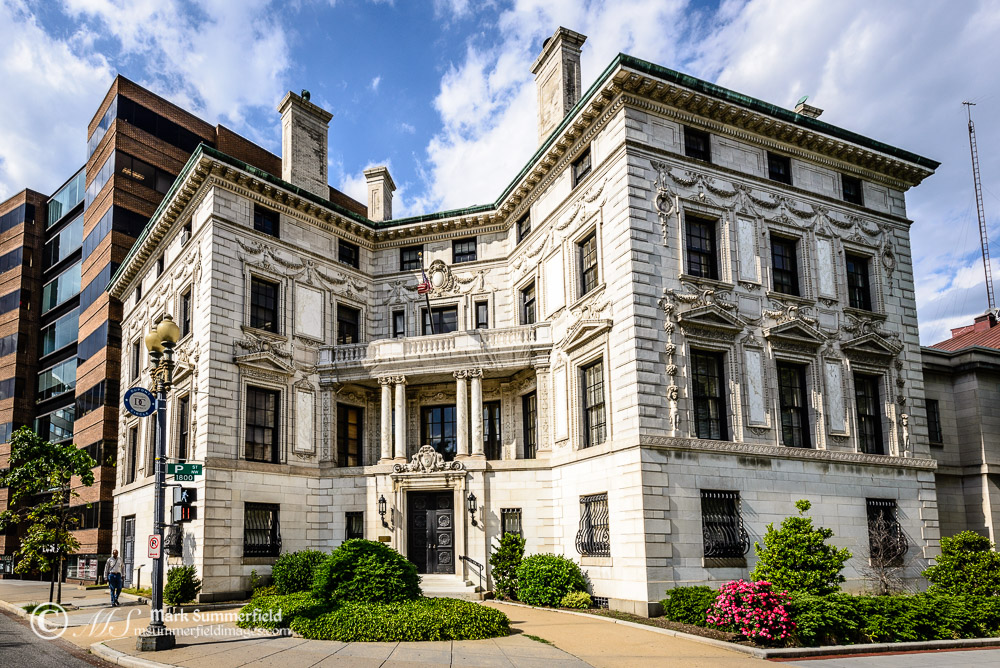