Over the next couple of posts we are going to take a look at the town of Ronceverte in West Virginia.  The first two posts will focus on the railroad facilities.  We will then take a look at some of the other historic structures in the town.

The Development of Ronceverte

In the early 1900s the Chesapeake and Ohio Railroad built a line which followed the Greenbrier River from Hinton to Pocahontas County where it linked to the Western Maryland Railway.  This opened up the valley as a means of transportation and allowed Ronceverte to flourish as a rail depot and supply hub for the Greenbrier Valley.  The town, though, had been around for about 30 years before the arrival of the railroad.

The early history of Ronceverte revolved around the lumber industry.  In the 1870s Colonel Cecil C. Clay of Pennsylvania, a close friend of Theodore Roosevelt and a Congressional Medal of Honor recipient for his services in the Civil War, brought the first “log drive” down the Greenbrier River from Pocahontas County. The finest timbers from this drive were used in the construction of a sawmill at St. Lawrence Ford.  Col. Clay laid out a town around his mill site.  It was his wife who renamed it Ronceverte.  Col. Clay’s company was the St. Lawrence Boom and Manufacturing Company, which for some time was the largest softwood manufacturing plant in the US.

The main business of the C&O, though, was not lumber, nor is it the other commodity for which this part of West Virginia is well known, coal.  In fact the main cargo for the line is crushed limestone from the quarry at Fort Spring, less than five miles west of Ronceverte.  The limestone is sent to Clifton Forge in Virginia where it is fluxed in the large furnaces.  The railroad line from Hinton to Pocahantas County was part of the “Gravel Girtie” line because of the cargo. Seen in these images is the coaling tower which was built by the C&O in 1935.  This particular one is of a rare concrete construction.  A coaling tower or coal stage is used to load coal into the steam locomotives, in this case before the hard climb through the mountains and onto Virginia.  With the conversion of the railroads to diesel power, the need for facilities linked to coal ended, but many remain in place today due to the high cost of demolition with these massive structures. 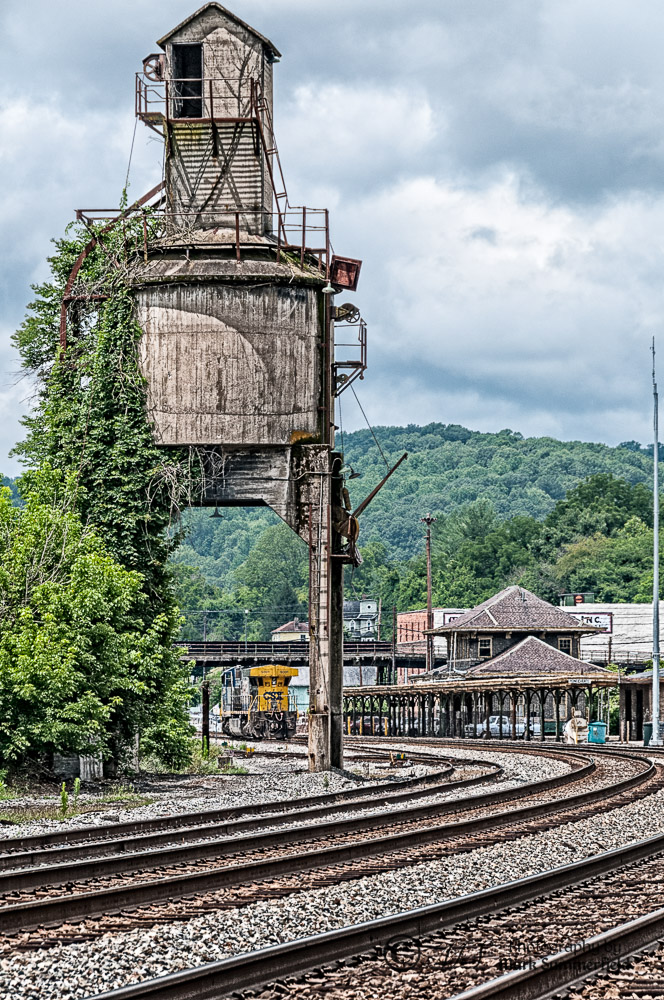 Article Name
Ronceverte Coaling Tower
Description
The Ronceverte coaling tower was built by the C&O in 1935. It is of a rare concrete construction. With the conversion of the railroads to diesel power, the need for facilities linked to coal ended, but many remain in place today due to the high cost of demolition with these massive structures.
Author
Mark Summerfield
Publisher Name
Mark Summerfield
Publisher Logo