In the next two weeks we will visit Thurmond, West Virginia.  This is a town that is intrinsically tied to coal and timber and the C&O railroad that was used to transport these commodities out of the Appalachian Mountains of West Virginia.  In its heyday in the 1920s, Thurmond had more coal running through it than Cincinnati, Ohio.

The history of Thurmond began in April 1873 when a land grant of 73 acres on the north bank of the New River was given to Captain William D. Thurmond as payment for his services as a surveyor.  At the time of the land grant there was already a Chesapeake & Ohio Railroad main line running through it.  The town remained small, although with its own post office which opened in 1888, until 1892.  This was when Thomas G. McKell of the nearby community of Glen Jean negotiated with the C&O railroad for a crossing at Dunloup Creek.  This created what is now known as the Southside Junction with its bridge over the New River.  The bridge carries both the railroad and a single track road.  This is the way visitors enter Thurmond today.

With the opening of the railroad junction Thurmond became an important link between the rich coal fields of Southern West Virginia and the rail industry.  A railroad yard was built in Thurmond where the short trains coming out of the surrounding mines in the area were assembled into longer trains for movement along the main line.  By 1904, Thurmond was fourth on the entire C&O system in total revenue receipts.  In 1910, the C&O operation at Thurmond had grown to being first in revenue receipts at $4.8 million representing about 20% of the entire company’s revenue.  Thurmond was responsible for more tonnage than Cincinnati and Richmond combined.  Freight was not the only revenue creator for the railroad at Thurmond.

The current railroad depot was built in 1904 to replace the original structure which was destroyed by fire.  This two story structure provided much of the administrative support to the C&O in Thurmond as well as serving the passengers.  The upper level housed the signal tower, dispatcher’s office, train master’s office and the conductor’s office.  The lower level served the travelers.

By 1910, seventy five thousand passengers passed through the railroad depot at Thurmond.  A little different from the passenger operations today.  Thurmond was removed from the regular Amtrak passenger schedule in April 2006. The Cardinal train, which runs between New York to Chicago, passes through Thurmond three times a week in each direction. The station has become a “flag stop”, meaning that the train will only stop when passengers make prior arrangements to board the train either though the purchase of a ticket from the machines at the depot or calling ahead.  As you can well imagine with this style of operation, Thurmond is one of the least used Amtrak stations.  In fact in 2012 it was the second least used. For such a little used depot, Thurmond station is in remarkable condition.  This is because it was restored in 1995 by the National Park Service.  It is now a Visitors Center and museum for the Thurmond National Historic District, part of the New River Gorge National River.

Part 2 of our visit to Thurmond will be in one week’s time. 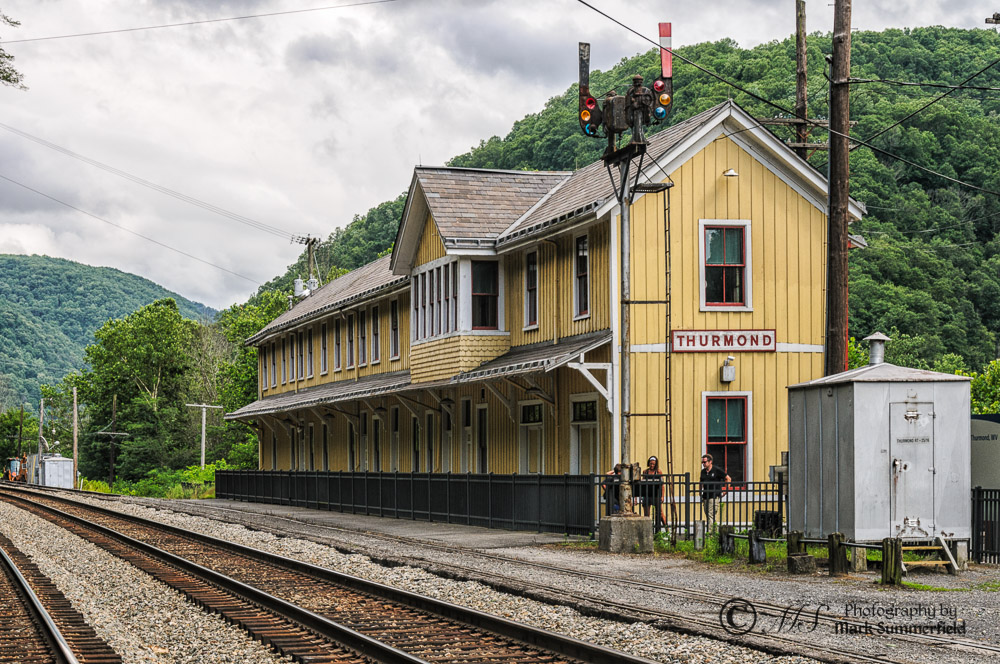 Article Name
Thurmond West Virginia - Part 1
Description
Thurmond, West Virginia is intrinsically tied to coal and timber and the C&O railroad that was used to transport these commodities out of the Appalachian Mountains