The county courthouses we have visited in the past such as Hanover County, Essex County or Prince William County have been some of the oldest in the state of Virginia. Today we visit one of the oldest counties in the state. The courthouse, however, is much more recent. New Kent County was formed in 1654. Unlike most of the other counties in the state, the county buildings were situated in a village formed for the purpose. The village of New Kent County Courthouse is small, to say the least. In 1835 the Martin’s Gazetteer described the village:

Besides the usual county buildings, this village contains 10 dwelling houses, 6 mercantile stores and 4 taverns – no house of public worship, the Court House being made use of for that purpose… Population 41 persons; of whom one is a physician.

By 1941 the population had grown to 50. It has not increased very much since then.

By 1908 the courthouse was in need of repair. This structure had been built to replace one destroyed during the Civil War. At the time a two acre plot of land had been offered at Windsor Shades on the C&O Railroad which many of the county residents preferred over the existing site. The Board of Supervisors declined the offer. They planned to repair and remodel the existing building. This plan did not go down well with one of the local judges who obtained a restraining order to prevent the work.

In April 1909, the Board of Supervisors rescinded their earlier decision to remodel the existing courthouse. They decided, instead, that a new building should be constructed. The courthouse site sits on a grass-covered knoll. This is a location that just cries out for some architectural masterpiece honoring the justice served within. As you can see from the image here this is not what was built.

The New Kent County Courthouse built in 1909 is a very simple rectangular brick building with very little adornment. The central tower and bracketed cornice constituting the most significant architectural features. Even the entrance only has a small porch with simple plain pillars. The structure was built by B.F. Smith Fire Proof Construction Company for $6,664.

This courthouse was replaced in 1990.  The building is now used as part of the county administration office complex which has built around the new courthouse which is located about 200 yards behind the existing courthouse.

At the same time a new jail was built which is shown in the image below. In keeping with the small population of not only the village of New Kent County Courthouse but of the whole county, the jail is tiny to say the least. Now the home of the New Kent Historical Society, the jail only had a couple of cells. 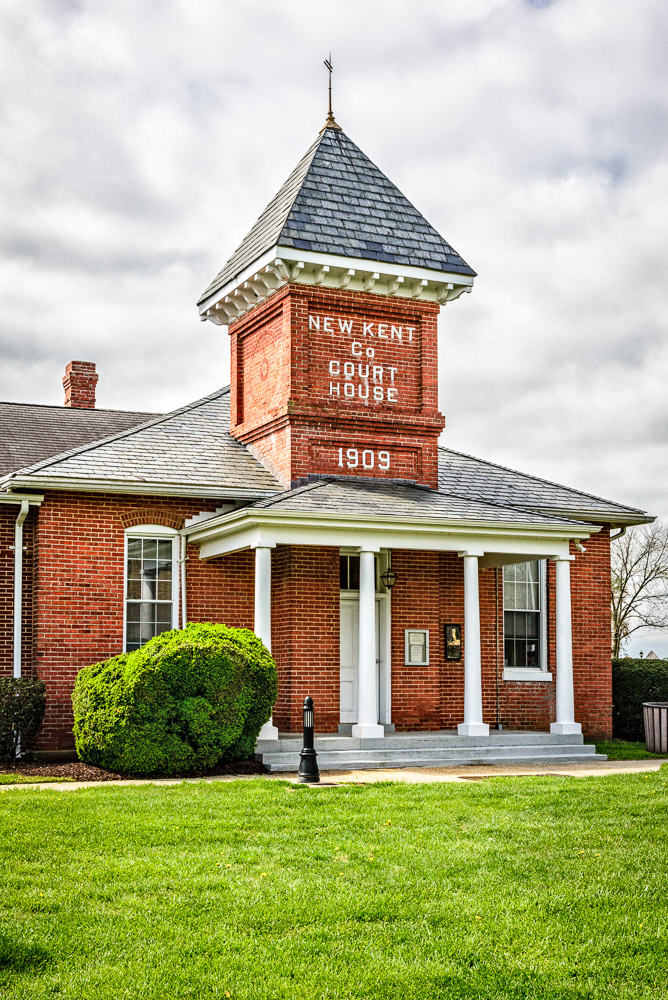