Point of Rocks in Frederick County Maryland has always been an important crossroads.  Located on the north banks of the Potomac River, the Native Americans used the area for a major north-south and east-west river crossing as well as  lodging and hunting. They were followed by the European traders and the earliest settlers in the early 1700s.

The next major growth to the area came as a result of the Potomac Company which was created in 1785 to improve the navigability of the Potomac River.  Promoted by George Washington, its aim was to encourage trade and settlement of the Ohio Territory after the Revolutionary War.

But it was the arrival of the railroad together with the competing Chesapeake and Ohio Canal Company in the middle of the 1800s that made the village of Point of Rocks explode almost overnight. For three years the B&O Railroad’s western terminus was at Point of Rocks, awaiting a court decision on how both the railroad and canal would pass by the “point” just west of town. Both modes of transportation passed next to each other for the next 13 miles to Harpers Ferry.

Point of Rocks is still the location of an important railroad junction and the site of one of the most picturesque, best known and most photographed of the historic stations of the former Baltimore and Ohio Railroad.  At this junction, the ex-B&O Old Main Line from Baltimore, one of the oldest lines in the country, and the ex-B&O Metropolitan Branch from Washington, D.C., which opened in 1873, come together and continue west as a single line to Cumberland, Pittsburgh, and Ohio.  All lines are now operated by CSX.  The Metropolitan Branch line is also used as a commuter line into Washington DC operated by the MARC train system.

The Point of Rocks station presides over the junction from inside the wye formed by the two main lines.  Designed by the noted B&O architect Ephraim Francis Baldwin, the station was completed in 1876 and placed on the National Register of Historic Places in 1973.  This Victorian Gothic style station is reminiscent of a Bavarian lodge.  One of its most compelling features is the tall steeple-topped tower that directly faces the main line coming from the west and oversees its division into the separate lines to Baltimore and Washington. 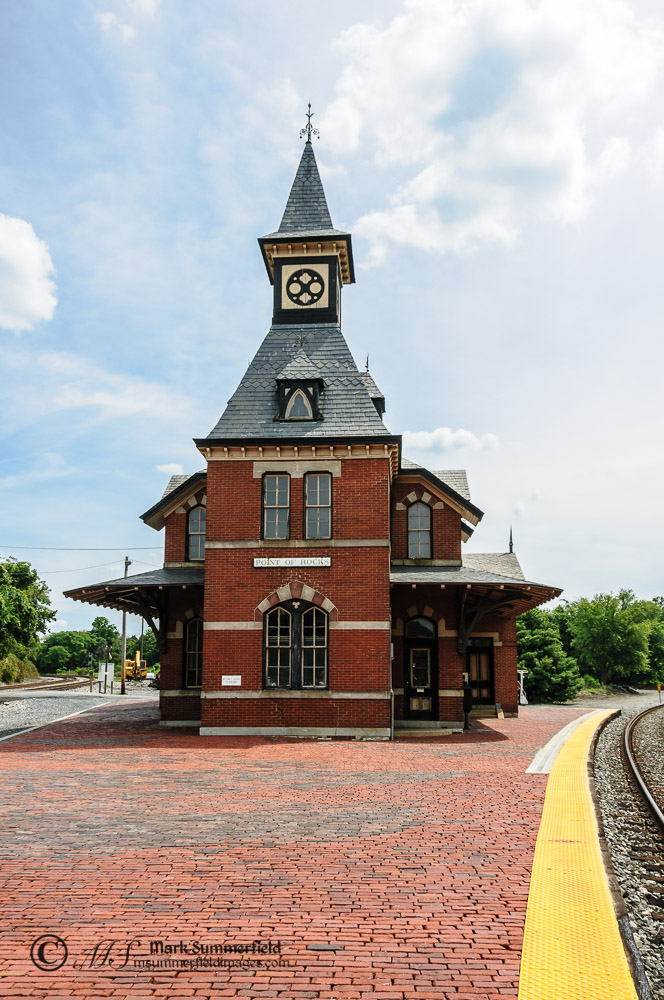